Leo Cullen goes his own way for Scarlets test 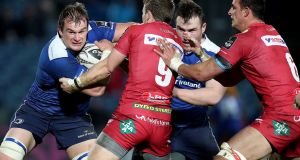 Leinster’s Rhys Ruddock comes up against with Jonathan Evans and Aaron Shingler of Scarlets in March. Photograph: Dan Sheridan/Inpho

There’s life in the old Pro12 yet. Barely. This semi-final will struggle to fill the Ballsbridge arena with only 16,000 tickets, including those notoriously weather-influenced season ticket holders, flogged thus far.

With cranes dominating the Dublin skyline, while this penultimate game for the secondary trophy on offer fails to capture the imagination of the Leinster rugby-set, who love their Lyon sunshine, the good times are clearly back again.

At least Leo Cullen’s Leinster XV seems to confirm that Joe Schmidt does not influence provincial selections for season-defining games.

Unless those excluded are being kept on ice for Ireland’s summer tour.

Either way, the three excluded tourists – Rory O’Loughlin, Andrew Porter and James Ryan – have been unable to feature regularly in blue this season for varying reasons.

Ryan – lauded by Stuart Lancaster earlier in the week – suffered a grade-three hamstring tear training with UCD in November while Porter has been learning a new trade, with Greg Feek punching in the overtime card to teach the humongous young loosehead the art of tighthead.

It’s long been the Leinster way for foreign players to be preferred over local rookies but Cullen sees Adam Byrne as his right winger this season – except for the small matter of a Champions Cup semi-final against Clermont when he went with Fergus McFadden (dropped tonight) and Dragons-bound Zane Kirchner.

“Devin didn’t train last week,” said Cullen, “Carrying a little bit of an ankle knock from Ulster but Hayden and Ross have gone well this year. It’s important we finish strong and Dev will give us good impact there.”

Regarding Leinster’s backrow musical chairs, Cullen has gone with two backs on the bench – assisted by the versatility of Joey Carbery at fullback – to make room for the outstanding Dan Leavy and Lions flanker Sean O’Brien to be unleashed.

“We are still managing Sean coming back in,” said Cullen before making reference to the “really tough calls” from the 51-player panel he has tinkered with since September.

Leavy makes way for Josh van der Flier as a battle that, ideally, lasts the remainder of two very long careers is flipped on its back once again. Really, Leavy is squeezed out of the pack by Rhys Ruddock’s Herculean performance against Clermont as the half Welsh blindside looks primed to lead Ireland against USA and Japan next month.

Still, considering the high standards Leavy is consistently bouncing up against, being dropped must drive him mad. Leavy and Scarlets openside James Davies are joint top of the Pro12 turnover stats on 27 in 1,240 minutes (Davies has 1,176 minutes).

As a flanker, Leavy appears to be following a similar pathway of the 22-year-old version of Paul O’Connell. Except there’s even more backrow debris for Leavy to wade through than the quality locks O’Connell leaped over. Granted, in Cullen, Bob Casey, Mick O’Driscoll, Donncha O’Callaghan, Mick Galwey and Mal O’Kelly there were plenty.

Cullen is the first port of call when it comes to managing this unending flow of quality flankers into the Irish system via Leinster schools.

“All the time you are looking for balance and [considering] the opposition you are going to play; the form of guys, physically how they are at this stage of the season. What’s going on in the rest of their lives. So, you are making those calls and assessments all the time.

“Josh has been a very, very steady performer for us. Same as the rest of those backrow guys. Dan has come in and done incredibly well. It’s great to have that luxury. We want to have a strong group that starts but also a strong group to finish.”

Continuing on the breakdown topic, Cullen stated that Scarlets captain “John Barclay is one of the most heavily penalised players in the northern hemisphere...”

“Is that not you?” asked Ruddock.

Incidentally, Ulster will not be replacing the crocked Arno Botha with out-of-contract Leinster flanker Dominic Ryan.

The Scarlets look worse off without Jake Ball (shoulder) and Lions hooker Ken Owens (ankle) so Leinster really should have more than enough to march on as Cullen stays loyal to men who delivered for him this season more often than not.

All told, since the Champions Cup semi-final defeats, the helter-skelter nature of the rugby season has abated. With the summer tours looming, nobody wants to get injured. Only a Leinster versus Munster final will shake off the cotton wool.

Klopp says Lampard can succeed at a club with more patience 16:21
Pádraig Harrington says Ryder Cup must go ahead in September 14:43
Allaho could be Ryanair bound after assured win at Thurles 14:13
Tadhg Furlong could be fit for Ireland’s Six Nations opener against Wales 13:18
Arsenal sign Real Madrid’s Martin Odegaard on loan 12:12
Here is your handy guide to sport on television this week