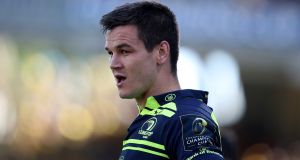 Johnny Sexton and Robbie Henshaw come back into the Leinster team for Friday night’s Pro12 semi-final clash with Scarlets at the RDS.

Joey Carbery is selected at full back with Adam Byrne starting on the right wing and captain Isa Nacewa on the left for his 170th cap.

Luke McGrath partners Sexton at halfback as Leinster look to book a place in the final and claim some silverware.

In the pack Jack McGrath and Tadhg Furlong are selected at loose head and tight head prop with James Tracy at hooker.

Ross Molony starts in the second row with Hayden Triggs – starting his final game at the RDS before he retires – at the end of the season beside him.

Finally in the back row Rhys Ruddock and Josh van der Flier are selected on the flanks with Jack Conan at number eight.

Cullen has gone with a six two split on the bench with two back rowers in his selection including the fit again Seán O’Brien.