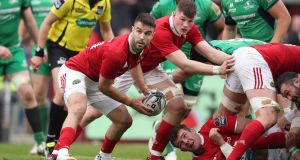 The holy trinity of wins over South Africa, New Zealand and Australia last year has Conor Murray at the beating heart of Munster, and especially Ireland. Photograph: Billy Stickland/Inpho

With 14 British and Irish Lions on show this weekend – the Scarlets’ Ken Owens is out – we could be forgiven for harking back to the old fashioned Whites vs Blues final Irish trials where the leaders would announce: “if the team does well so too the individual”.

I was never convinced the old grizzly war horses actually believed this axiom. Injury this weekend is one thing to avoid, but equally so a poor team performance which would no doubt impact individual performances, Warren Gatland and his bench. All the more so with Saracens providing much of the starting Test team.

Elite rugby players are selfish athletes who will want to avoid injury but win and in doing so perform, especially against direct Lions’ opposition. Although Leinster need to beef up their secondrow (Devin Toner on the bench) they will win tonight so the real game is in Thomond Park tomorrow where there’s a hint of possibility that the Ospreys can ask questions of Munster (and Gatland) on both the team and individual level.

A few weeks back I entertained the idea that our supremely talented Conor Murray would not have it easy with his tour buddy Rhys Webb who is as close to Agustín Pichot as is in these isles. Both Ospreys’ halfbacks will feel a tad angry that all the Lions’ attention is on the obvious 9, 10 and 12 of Murray, Johnny Sexton and Owen Farrell. So watch the variety Webb brings tomorrow to the base of everything, akin to Pichot but also like Eoin Reddan when he arrived into the 2007 Rugby World Cup. Having played one style in Wasps, Reddan expected that his “new” Ireland team-mates were on his wavelength. But so quick was he that even his team-mates were left behind.

For a cracking example of team-mates reading a scrumhalf, look at the lead up to George Kruis’s try on 21min 45sec against Clermont in the Champions Cup final. For the build-up rucks, Saracens scrumhalf Richard Wigglesworth simply passed left off the base. But watch, on 21:36, when he reverses and carries around the corner, his shoulders are squaring up as his options Jamie George, Alex Goode and Mako Vunipola hit the gainline.

Clermont’s tighthead Davit Zirakashvili arrives late and turns in, biting on Wigglesworth’s threat and abandons Goode. Goode anticipates both Zirakashvili biting and Wigglesworth’s passing ability so targets Zirakashvili’s space. From there it was a simple carry for Kruis. There was no mention of Wigglesworth’s crucial role in the try. Scrumhalves have this potential if team-mates are on the same wavelength.

Webb’s team are tuned into his electric breaks, especially his blindside wingers when he rewinds down the tram tracks. Ditto Dan Biggar. Apart from Webb’s pace, he continually presents to test a tackler, even when this is but a ruse to suck in a fatty before hitting an array of flying receivers such as another Lion, Justin Tipuric.

The Ospreys’ openside is one of the most talented rugby players in the world, yet I don’t think this qualifies him for a Lions Test start. Gatland may have Sam Warburton at six and learn in the RDS tonight the value of the perfect hybrid Seán O’Brien at seven (when he comes off the bench) and what he can do in a brutally physical Eden Park.

Darren Sweetnam – a man I called “Sweetman” for 40 minutes when Munster played the Maori All Blacks back in November – was unlucky to miss out on this summer’s Ireland tour. That night, like the European visit of Glasgow, was as much about emotion as it was about the obvious rugby evolution at Munster. Tomorrow is Munster’s last home game with a whole new set of expectations/burdens that the next season will bring. And like the 14 Lions, Sweetnam also has a carrot tomorrow should he make selection; winning while taming some Ospreys Lions would do him no harm.

This weekend is even more about the Lions’ bench than the starting team. Webb is a potential starter but for a different style I fancy Murray with Welshman’s battle over Greig Laidlaw being confirmed tomorrow. Why Murray? Well his passing and physicality are excellent, so too his box kicking, but it’s the holy trinity of wins over South Africa, New Zealand and Australia last year that has him at the beating heart of Munster, and especially Ireland. Put simply, he’s a winner, but do enjoy contrasting and comparing tomorrow.

Wider out watch Liam Williams against the quality of Isa Nacewa in Dublin. Forget Scarlets’ win over Ospreys, as Leinster’s ability will be too much. But do watch Williams as he explores space, ball in hand. Selected on the wing he can rotate within the back three with ease; an ideal Lions’ bench option. His ambition is sensational and Scarlets oscillate their width of attack making Williams a real threat.

I expect a Leinster win with both Leinster and Munster’s Lions to enhance their credibility and I wonder how desperate Ospreys are to win the Guinness Pro12 trophy? I can’t imagine the Munster Lions’ losing focus. Can you?

PS. What a great way for next season to finish with the seven highest-ranked clubs from the Pro12 qualifying for the Champions Cup, regardless of country. Being top dog in your country, Italy especially, is now redundant making the fight or flight most intriguing.