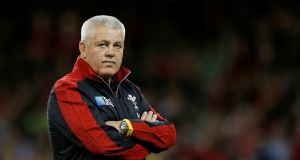 Warren Gatland will announce his squad for the Lions tour on Wednesday. Photo: Andrew Boyers/Reuters

When is the Lions squad announced?

The Lions squad for the 10-match tour to New Zealand that includes three tests will be unveiled on Wednesday at 12.0pm, live on Sky News. The captain is likely to be Wales flanker Sam Warburton who led the Lions to a 2-1 test series victory over Australia in 2013, according to the bookmakers and most pundits. Warren Gatland, touring with the Lions for a third time (2009, 2013 and 2017) – the last two as head coach after being the forwards’ coach under Ian McGeechan in South Africa, has already informed the player who will lead the party. The touring party names will be read out by Tour manager John Spencer.

Can you follow the announcement anywhere else other than Sky News?

The squad will comprise of how many players?

How many Irish players will go?

The record Irish representation selected in the original touring party was 14 – Jerry Flannery, Tomas O’Leary and Alan Quinlan didn’t make the plane through injury and suspensionn – in 2009 to South Africa, a squad led by Paul O’Connell. The under/over is 9-13.

Is the coaching/backroom team already known?

How many matches will they play?

10. They face New Zealand’s five rugby franchises, Blues, Crusaders, Highlanders, Chiefs and Hurricanes. The opening match of the tour is against the New Zealand provincial Barbarians and they also face the Maori All Blacks, while not forgetting the ultimate barometer of success and failure of the tour, the three test series against the world champions, New Zealand. The first match is June 3rd, the first test is June 24th and the final test and game of the tour is on July 8th.

What are the kickoff times?

All matches on the tour have an 8.35am kickoff Irish time and will be shown live on Sky Sports.

Graham Henry, who coached the Lions in 2001 and masterminded New Zealand’s 2011 World Cup victory would agree. He said: “I know from my own experiences how much the players respect getting selected for the Lions. It is the pinnacle of their career. It is massive but they need to do well and I just wonder if the itinerary is suicidal. That is my concern. They are playing New Zealand Maori, they are playing the five franchised teams – and those five franchised teams have nothing to lose, no pressure on them at all, so they will fire everything at the Lions and take them on.”

Is it correct that the New Zealand franchises will be allowed to select their All Blacks for those matches?

Yes. Each franchise has also commissioned special jerseys that they will wear against the Lions. Incidentally as things stand in the Super Rugby Championship, the Crusaders have won all seven matches, the Chiefs and Hurricanes six out of seven, the Highlands four and only the Blues have a losing record with three wins from eight matches.

How did it go the last time the Lions were in New Zealand?

Lions captain Brian O’Driscoll was spear-tackled in the first test and missed the rest of the series and the tourists were given a 3-0 hiding. The Lions coach Clive Woodward brought 44 players, split them into two teams, and there was a massive disconnect within the touring party.

Have they ever won a series in New Zealand?

Yes, 2-1 in 1971, a squad coached by Welshman Carwyn James and comprising of some of the greatest players of all-time. That is the Lions only test series win over the All Blacks and just to put it in perspective, they have won six and drawn three of 38 tests against New Zealand.

That first game against the New Zealand Provincial Barbarians is likely to contain one very familiar face for Lions coach Warren Gatland . . .

Yes, indeed. His 21-year-old son Bryn, an outhalf, seems odds-on to be selected. The young outhalf is part of the Blues roster for Super Rugby but given that the Lions match against the Blues is four days after the tour opener he is unlikely to play in both; something of a relief one would imagine for Warren and Trudi Gatland.

Any other quirky match-ups?

It’s something of a long-shot but former Blackrock College schoolboy and Irish underage international tighthead prop Oliver Jager has come off the bench to play a couple of matches for the Crusaders in Super Rugby this season but with the team having access to their All Blacks he is unlikely to be involved.

What if I want to go, how much will it cost?

Three tests and the Hurricanes game would cost about €8,950 for flights, accommodation and match tickets. The whole shebang, 10 matches (40 nights), would set you back about €12, 550.

How much is the players’ tour fee?

Are there still match tickets available for public sale?

Yes but not for the test series. If you wanted to go to the Lions opening match in Whangarei against the New Zealand Provincial Barbarians, tickets are available from between NZ$10-$99 while a game against a franchise like the Hurricanes they can still be purchased from the official site (allblacks.com) for between NZ$41-$129.

Is there much travelling in New Zealand?

The matches will be played in Whangarei, Auckland, Christchurch, Dunedin, Rotorua, Hamilton and Wellington.

So who’ll win the test series?