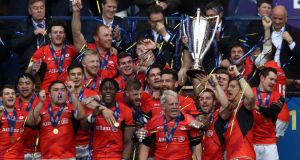 The top seven-ranked Guinness Pro12 clubs this time next year will qualify for the Champions Cup. Photo: David Rogers/Getty Images

Changes to the qualification process have been announced for the European Champions Cup competition.

Tournament organisers European Professional Club Rugby said that the top seven-ranked Guinness Pro12 clubs this time next year will qualify for the 2018-19 tournament.

Those qualifiers will be regardless of country of origin, replacing the current format which requires that at least one club from each of Ireland, Italy, Scotland and Wales is included in the seven qualifiers.

Based on this season’s finishing places, Italy would not have a team in the competition.

Aviva Premiership and French Top 14 qualifying, which is based on the highest-ranked clubs, will not change.

EPCR also announced that the 2018 European Challenge Cup winner will automatically qualify for the 2018-19 Champions Cup.

“These changes are designed to strengthen both the Champions Cup and the Challenge Cup,” EPCR director general Vincent Gaillard said.