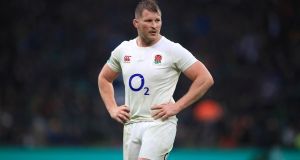 England hooker Dylan Hartley could be called up for the Lions’ tour of New Zealand if Wales’ Ken Owens is ruled out through injury. Photograph: Mike Egerton/PA Wire

Dylan Hartley missed out on a British & Irish Lions tour in 2013 after being sent off in the Premiership final and banned, but the England captain is likely to be called up for next month’s trip to New Zealand if the Wales hooker Ken Owens fails to recover from an ankle injury.

Hartley was one of the major omissions when the squad was announced last month, and while the tourists have not published the standby list of players, the Northampton forward is the most experienced option at hooker if Owens pulls out.

Owens suffered an ankle injury training with the Scarlets at the beginning of the week ahead of the region’s Pro 12 playoff semi-final away to Leinster. The Lions were informed and the hooker travelled to the Vale of Glamorgan, where the tourists have had a training camp this week, to be medically assessed.

If the Scarlets beat Leinster, Owens will not be available for the final for the following week. His ankle will be examined again before the Lions fly to Dublin on Sunday for another training camp and if the verdict is that he will not be fit by May 29th, when the squad flies to New Zealand, the head coach Warren Gatland will have a decision to make. If the medical team consider Owens will not be fit for the first match of the tour the following Saturday, it would leave the Lions running the risk of one of the other two hookers in the squad suffering an injury before the match, so leaving them without cover on the bench.

“Ken is missing a big game for the Scarlets, but with a bit of luck he will be okay for the tour,” said Lions skills coach Neil Jenkins. “Players do get injured but we hope he will be fine, if not for the final then for the Lions.”

Owens was chosen ahead of Hartley for the tour along with the England reserve hooker Jamie George, and the Ireland captain Rory Best, who was called up in 2013 when Hartley was ruled out by a long suspension.

When he announced his squad, Gatland hinted that the final choice had been between Hartley and George, who came off the bench early in the second half for England in this year’s Six Nations. “Rory and Ken had great Six Nations and we could not leave out Jamie who has done well off the bench and playing for Saracens,” he said. “It was always going to be a tough call and someone was always going to be disappointed.”