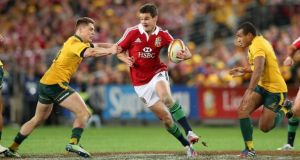 Johnny Sexton is set to feature on his second Lions tour after starting all three Tests in 2013. Photograph: David Rogers/Getty

On Wednesday, Warren Gatland will name his British and Irish Lions squad for this summer’s tour to New Zealand.

The 37 players selected will be faced with one of the most daunting tasks in the tourists’ history, as they take on the world champions, unbeaten on home soil since 2009.

Ending the All Blacks’ 45-Test home winning run is going to be a tall order - winning twice to secure the series even more so.

The Lions’ cause is hardly helped by the tour schedule - there is just a week between the Pro12 and English Premiership finals on May 27th and the first fixture against the New Zealand Barbarians on June 3rd.

In 1997 Jim Telfer said the first Test against South Africa represented the side’s Mount Everest. Beating the Springboks is a trip up Croagh Patrick in comparison to what awaits down under in June and July.

However, despite the odds being stacked firmly against the Lions, there is hope - and this mainly lies in the pool of players Gatland will have at his disposal.

Ireland’s defeat of England in the final game of this year’s 2017 Six Nations proved that - despite all the bluster from Eddie Jones’s side - there isn’t a single standout nation in the northern hemisphere.

Granted, England’s 18-Test unbeaten run and back-to-back championships prove they are currently the best side in the northern hemisphere.

But their loss to Joe Schmidt’s side - as well as Scotland’s victories over Ireland and Wales, and Wales’ win over Ireland - show how on their day the four nations comprising the Lions are more than a match for each other.

This is likely to lead to a fairly even representation of each nation within Gatland’s squad - and while Scotland will continue to lag behind in terms of numbers they will at least provide one of the first names on the team sheet in Stuart Hogg.

England’s consecutive championship wins, and Gatland’s day job with Wales, make it likely the countries will provide a large bulk of the travelling party - although Gatland would do well to justify matching the 15 Welsh players originally picked for the victorious 2013 tour of Australia.

However, there is one achievement the current England and Wales can’t lay claim to which Ireland can - beating the All Blacks.

Indeed, last November’s 40-29 win over the world champions in Chicago has provided the Lions with a blueprint for how to topple New Zealand, and it is likely to ensure Ireland have a healthy representation in Gatland’s squad.

Since the inception of the Lions in 1888 Ireland have only provided 10 or more players three times - and this has come in the past three tours.

There were 11 Irish players originally selected for the 2005 whitewash in New Zealand - partly down to Clive Woodward naming a mammoth party of 44 .

And in the last tour nine Irish players made Gatland’s first cut. Cian Healy withdrew from the tour with an ankle injury, but then Rory Best, Simon Zebo and the holidaying Tom Court were called up and all featured.

That Ireland’s highest ever Lions representation came in 2009 stands to reason, as they had just completed the Grand Slam for the first time since 1948.

And while Wales dominated the touring party in 2013 - as back-to-back Six Nations winners - Ireland’s healthy representation on that tour was followed by back-to-back tournament successes of their own.

So, as Ireland have become a more consistent and dominant side on the world stage they have provided more Lions - and this theme should continue this summer.

Schmidt has a squad blessed with powerful ball carriers, ability on the floor and set-piece technicians - all of which will be key if the Lions want to achieve the improbable.

With these things considered there should be plenty of green donning the red this summer - here is a look at who could make the cut: