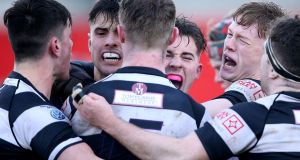 Two second-half tries helped Pres clinch a place in the Munster Schools Senior Cup final after a hard-fought win over a gallant Bandon Grammar School at Musgrave Park on Wednesday.

Rank outsiders Bandon, who were appearing in their first semi-final, competed magnificently all through and led 3-0 for a long period until the west Cork side were hit by injuries.

First, influential fullback Sean Hudson was forced off after 43 minutes and then moments later centre Ethan Greene had to be taken away by stretcher.

Play was held up for a quarter-of-an-hour and the delay clearly impacted on the Bandon side, whose momentum was interrupted, allowing hot favourites Pres finally become an attacking force.

And it took a moment of inspiration from powerful centre French to break Bandon’s defiance in the 50th minute. His brilliantly executed kick and chase in a tight space led to a try in the left corner for a 5-3 lead.

Pres, though, couldn’t relax, especially, when Bandon outhalf Evan Palmer tried his luck from a long-distance penalty nine minutes into injury-time only for his kick to fall short.

Bandon enjoyed wind advantage from the start and received an early boost with a Hudson penalty from in front of the posts after just three minutes.

The weather changed dramatically as sleet showers turned the ball into the proverbial bar of soap and the floodlights had to be turned on amid the gloom.

Bandon dominated territory with scrumhalf Jack Crowley’s propping kicks keeping Pres on the back foot, forcing them to concede penalties, as the outsiders led 3-0 at the interval.

Pres were still struggling on the resumption until French and O’Sullivan struck for the crucial scores.