Jared Payne and Andrew Trimble set to return for Ulster

Iain Henderson and Paddy Jackson will not feature against Benetton Treviso 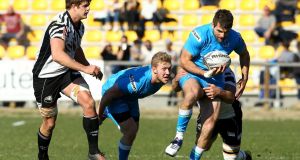 Ulster will be hunting down their fourth consecutive bonus point victory, when they host Benetton Treviso on Friday night, with both Jared Payne and Andrew Trimble likely to feature in Les Kiss’s starting line-up.

Payne successfully came through a 20-minute cameo off the bench in Sunday’s 40-17 victory against Zebre in what was the 31-year-old’s first game-time since shipping a kidney injury playing for Ireland in November’s win over Australia.

And while Ulster will be hoping his presence can be as effective it was in Parma – when his delicate grubber created the province’s sixth and final try for debutant David Busby – Joe Schmidt will also be carefully monitoring Payne’s progress.

Indeed, a strong outing against the Italians on Friday could yet see Payne being parachuted back into the national squad – though this could depend on Rob Kearney’s fitness – ahead of next week’s trip to Wales for the Friday night game at the Millennium Stadium.

“He came through with no issues on the weekend,” Kiss said of Payne, “but it is just baby steps in terms of seeing how he went,” he added.

Trimble, who got his first Six Nations game-time against France when he came off the bench to win his 70th cap, sat out Monday’s open training session at the Aviva Stadium but is thought to be released back for Kiss to utilise this Friday.

Iain Henderson, who also came off the bench in the win over France, is not available for the province after shipping a stinger to his shoulder while fellow replacement Paddy Jackson is also not available due to being rested.

Kiss will be able to deploy Springbok Marcell Coetzee who missed out against Zebre due to illness, on what would have been only his third game for the province, and his fitness will bring Ulster a much-needed ball-carrying presence.

Craig Gilroy is also believed to be available after shaking off a lower leg issue he picked up in the wake of the Glasgow game.

Louis Ludik, who also sat out the trip to Parma due to a knock, could feature in Kiss’s match day squad. But definitely out is centre Stuart McCloskey, who has not played since picking up a leg injury against Edinburgh at the start of February, while fellow centre Darren Cave also remains side-lined.

Still with a game in hand, Ulster will be chasing another certain-looking five-pointer to close the gap with the Scarlets who are one place and five points in front of them in fourth though Kiss will want to eradicate some of the scruffier elements of their game on show against Zebre.

“This is not a banana skin game coming up but it’s a pretty important one,” Kiss admitted.

“They are a good team and we’ve got to get out here at Kingspan and deliver the money,” he added while mentioning that the Italians could employ the same breakdown tactics employed by the national side at Twickenham on Sunday.

And while stating that Ulster were ready if this came to pass, Kiss said: “If we can get this one (won) then the next one (Zebre at home, their game in hand) is another chance and then the season looks completely different.”

1 Sideline Cut: Vignette shows why Bird is the true shark in The Last Dance
2 From TB to polio: GAA is no stranger to disease disruptions
3 Patience and a local focus: More clubs should be like Athletic Bilbao
4 Timo Werner breaks Leipzig record to help them past Mainz
5 Damien Duff leaves Celtic to focus on Ireland role
Real news has value SUBSCRIBE

From TB to polio: GAA is no stranger to disease disruptions 05:00
Scottish report casts its net wide to ensure protection of wild salmon 00:00
Seán Óg Ó hAilpín regrets ‘callous’ aftermath of Cork strikes 23:00
Damien Duff leaves Celtic to focus on Ireland role 19:26
Daniel Abt disqualified for using ‘ringer’ in virtual race 19:04
Here is your handy guide to sport on television this week