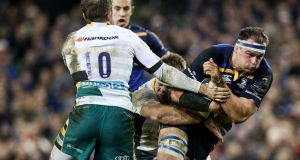 As he prepares to face an in-form Scarlets at the RDS on Saturday night in the Guinness Pro12, Leinster flanker Rhys Ruddock is hopeful that he has left his latest injury woes behind him.

Last Friday’s victory over Newport Gwent Dragons was his first appearance in seven weeks for Leinster, and Ruddock utilised his time off to develop physical strength in areas that had become quite weak.

“It has been frustrating picking up injuries, especially when you get back from one and pick up another. On a personal level, it has been a good time for me to develop one or two things that were lacking – the reasons why I was getting injured,” Ruddock said.

“I had surgery on my ankle in the summer. At the time it felt good, but I ended up picking up soft-tissue injuries. Calf and quad injuries. The underlying issue was the ankle. I spent a lot of time on that in rehab, and developing strength in areas that had gotten weak. I am confident that the body feels a lot better. I feel those little innocuous ones are behind me.”

Leinster enter round 17 leading the Pro12, but they will face a Scarlets side that moved up to second place as a result of their 30-21 triumph against Munster at Thomond Park on Friday.

The Welsh outfit previously defeated Leinster in a high-scoring encounter at Parc y Scarlets last November, and Ruddock knows they can’t afford to let their standards drop this weekend.

“It amplifies what we already knew. They’ve been a side we’ve been really impressed by. This season, they are probably performing better than ever.

“We already knew this game in particular would be a massive challenge for us. Seeing that result and knowing how difficult it is to get a result in Munster at the moment makes us even more on our toes.”

With 13 senior international caps to his name (including three on last summer’s tour of South Africa), Ruddock’s return to fitness potentially keeps him on the radar of Joe Schmidt.

However, a recall to the Ireland squad isn’t on the 26-year-old’s mind at the moment, and the intense competition for places in the Leinster backrow means he can’t take his place at provincial level for granted either.

“I genuinely haven’t been thinking about that [Ireland] a huge amount, because I knew that by the time I got on the pitch a lot of the Six Nations would have passed. Over the last couple of weeks, my focus has just been on getting myself right and getting my form to the level I want it to be. Playing my best rugby is the main goal.

“It is an enormous challenge to even get yourself in the [Leinster] squad, at the moment. It definitely spurs you on. If you want to be involved in the bigger games at the end of the season, you need to be playing your best rugby.”

Ruddock will be keeping a keen eye on Ireland’s next game, though, as they will face Wales at the Principality Stadium on March 10th. Ruddock’s father Mike led the Welsh to a Grand Slam in 2005, and like Ireland, he believes they have enormous strength in depth at the back of their scrum.

“We probably have a similar situation over here [with the backrow]. There are a lot of guys who offer different things. It is about timing. From what I’ve seen, Ross Moriarty seems to be playing unbelievable, especially in that England game.”

1 Sonia O’Sullivan: Taming The Tan gave us one last roll of the dice before shutdown
2 Son Heung-min to carry out mandatory national service in South Korea
3 Avoid the treadmill at all costs – marathon training in the 2km radius
4 Rich Premier League clubs way off the mark in cutting staff pay
5 Reality Bites – Tales from the new normal: Shane O’Donnell
Real news has value SUBSCRIBE