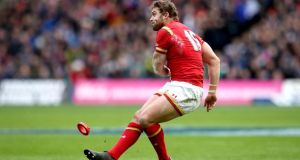 Leigh Halfpenny accepts he made an error of judgement in turning down a kick at goal during Wales’ Six Nations defeat to Scotland.

Fullback Halfpenny spurned the opportunity of kicking a 51st-minute penalty with Wales trailing 16-13 at Murrayfield on Saturday.

Skipper Alun Wyn Jones had already indicated to referee John Lacey that Wales would go for the three points in the hope of levelling the match.

But Halfpenny’s decision forced outhalf Dan Biggar to kick for the corner and, after Wales had failed to score from the resulting lineout, Scotland pulled away to emerge 29-13 winners.

“For me, I need to hold my hand up. I made a mistake and I wasn’t decisive enough,” Halfpenny told the official Welsh Rugby Union website.

“Alun Wyn wanted to go for the three points and I’ve allowed errors in my game before and the conditions to influence me and turn down the kick.

“I should have parked those mistakes and moved on. In the past I have made errors and not allowed those to effect me and moved onto the next job.

“It’s probably the first time it has happened but it’s the last time it will.

“I don’t think I’ve ever played at Murrayfield when its not been difficult conditions.

“The wind really picks up and it is up there with one of the most difficult stadiums to kick in, but that shouldn’t have an influence on decisions if a kick is in range.

“For me it’s a privileged position to backed to be the kicker, I’m excited to get back out there, get the tee in my hand and go from there.”

Halfpenny has scored 594 points for Wales and is recognised as one of the most reliable kickers in world rugby.

But the 28-year-old Toulon star was unsettled at the end of the first half after missing a penalty which would have extended Wales’ lead to 16-6.

Wales kicking coach Neil Jenkins said he had a “good chat” with Halfpenny since the Murrayfield defeat, but backed the two-time British and Irish Lion to show his calibre against Ireland next week.

“He’s 88 per cent for the championship. He’s a world-class kicker and the stats speak for themselves.

“He’s been there, done it – Grand Slams, Championships, Lions – and I believe he’ll keep doing it at the highest level for Wales for a long time yet.

“I think he’s in the top three kickers in the world and I’ve no doubt that he’ll be ready to go against Ireland a week on Friday.”

Wales captain Jones adopted a philosophical stance over Halfpenny’s decision not to take the penalty in Edinburgh.

“Obviously from my point of view to level the scores would have been a good place to be midway through the second half, particularly the way possession and territory had gone,” Jones said.

“Leigh felt the conditions weren’t right. I back the decision of my world-class kicker. We had the option of the lineout, but it didn’t work out.”