Rugby Stats: Ireland need to rule the skies against Wales 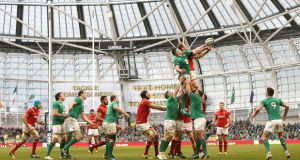 “Lineout Wars” provides a little oomph in descriptive terms but at the same time reasonably represents the importance of the confrontation when Ireland travel to the Principality stadium to take on Wales in the the Six Nations Championship on Friday week.

The set piece as an attacking fulcrum is a staple that predates professionalism, although both the lineout and the scrum are a great deal more sanitised post 1995. Irish Times columnist Liam Toland spoke about how Ireland varied the options out of touch, initially taking ball off the top, before changing to a mauling approach; then switching once again.

As part of the weekend discourse, attention was drawn to Wales hooker Ken Owens and the statistic that not a single one of his throws had been pilfered. Wales have been awarded 37 lineouts in their opening three matches of the Six Nations. Owens has a blemish free record of 33-0, while replacement hooker Scott Baldwin is 2-2 for his time on the pitch.

So an obvious way to destabilise the Welsh is to get after their lineout – a tough remit though. Wales have four main jumpers in their starting team as the graphic illustrates, along with replacement Cory Hill who has chipped in by winning two lineouts over the three matches.

It might come as a little surprise to note that flankers Justin Tipuric (13) and Sam Warburton (11) are the two most high profile options, not simply as tail gunners, or number six jumpers, as they move up and down the lineout. It was interesting though that Wales used secondrow and captain, Alun Wyn Jones on six occasions in their most recent match, the defeat to Scotland.

His engine room partner, Jake Ball, has been thrown to just twice, the same number of occasions that replacement Cory Hill has been used as an option. The Welsh didn’t lose a lineout in the game against Italy, and lost one each, in the defeats by England and Scotland.

Ireland in contrast, under the auspices of assistant coach Simon Easterby, tend to throw just over a third of their lineouts to Devin Toner, having racked up a record of 42-2 so far in the tournament. Toner has won 15 lineouts on the Irish throw and stolen two, one against Italy and another in the victory over France.

There was a suggestion in some sections of the media that there aren’t too many natural lineout options in the Irish backrow but that is contradicted by the statistics. Flanker CJ Stander and number eight Jamie Heaslip have each won seven throws, while Peter O’Mahony, who replaced Seán O’Brien in the French match, claimed a brace in the 12 minutes he was on the pitch.

Donnacha Ryan, who missed the game against Scotland through injury, has won five lineouts. Since his return to the starting line-up, Ireland haven’t lost a single lineout; 8-0 v Italy and a whopping and praiseworthy 22-0 in the French match. His prowess as a lineout tactician along with the equally shrewd Toner, underlines their value as a pair.

The two steals against Ireland both came in the Scottish game. Ireland captain Rory Best has a record of 29-2, while the 24-year-old Niall Scannell, a late replacement for Best in Rome when the Corkman made his debut, is 12-0 on his throw. Leinster’s James Tracy, who came on against Italy, has one successful throw from his only attempt.

So where do Friday week’s protagonists come in terms of the best functioning lineouts in the Six Nations? Ireland are second and Wales third with England (34-0), whom Joe Schmidt’s side meet in the last round of fixtures leading the way; Scotland are fourth (31-3), France (27-5) fifth and Italy (26-6) sixth.

The other constituent of the umbrella term, set piece, is the scrum and this is certainly an area that Ireland will target in Cardiff. Wales have lost more scrums on their put-in (3) than any other side in the tournament, while it has been a particular strength for Ireland.

Ireland scrum coach Greek Feek will have been pleased with this unit skill as they conspicuously dominated this aspect of the game against both Scotland and Italy, while also been able to get a squeeze on the French scrum at times.

Ideally, Ireland would like to have one of the French referees, particularly Jerome Garces – he will officiate their final match against England – or Romain Poite in charge against Wales but that task falls to England’s Wayne Barnes.

According to the official data, Ireland are 20-0 (they have started both Jack McGrath and Cian Healy at loosehead prop in that sequence, as well as hookers Rory Best and Niall Scannell) across three matches while Wales are 12-3 during the same stretch and also having changed their tighthead from Samson Lee to Thomas Francis for the last two matches. This does not include scrum penalties conceded.