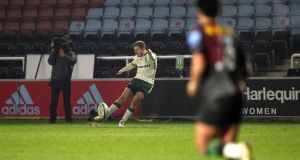 No wonder the growing consensus is that the show must go on. A thrilling weekend of Premiership fixtures was rounded off with a final flourish as Oli Hoskins’s last-gasp try – expertly converted by Paddy Jackson – completed a rousing London Irish comeback to earn a draw, testament to their perseverance after a trying few weeks.

There appears to be a hole in the calendar next weekend with the European competitions set to be suspended but surely, pandemic permitting, the Premiership clubs will move their fixtures forward – on this evidence the neutral would certainly not be disappointed.

Harlequins will be with this result, however. It was a match they let slip away in the closing stages having been 27-15 to the good, and while Irish collect three match points having scored four tries, the hosts go away with just two. They too have had their Covid-19 disruptions of late – their last fixture against Worcester was called off while Irish’s last two matches have been cancelled – but while both sides deserve credit for their performances, the mood in the two dressingrooms was evidently different.

“I’m pretty disappointed,” said the Harlequins head of rugby, Paul Gustard. “It’s deja vu a little bit, we concede heavy late in games. We have tried different things but we make too many simple errors and are the architects of our own downfall. It’s the same thing happening week on week, the team is hurting and are upset though. We are wearing a bit of pain from time to time, but it is too much pain.”

Quins will rue their inability to close the match out given Scott Steele’s second-half try extended their lead to 12 points but their problems began when Archie White was shown a yellow card for a knock-on with 13 minutes to go.

Albert Tuisue, one of Irish’s standout performers, powered over to bring the visitors within touching distance before Hoskins finished off from a driving lineout. Jackson’s conversion was difficult, from out on the left, but the former Ulster outhalf had a chance to win it with a penalty – he pushed his kick from halfway to the right.

Superiority Harlequins began in the ascendancy and threatened down the left with Alex Dombrandt closing in on the try-line, only for the London Irish scrumhalf Ben Meehan to bundle the number eight into touch. It is unfortunate for Dombrandt that his failure to convert took place right in front of the watching Eddie Jones, who is yet to be convinced of the player’s suitability to Test rugby.

The hosts did make their earlier superiority pay with the opening points – Smith on target with a penalty from straight in front of the posts – but the Harlequins coaches will have been furious at how London Irish took a surprise lead with the opening try. Curtis Rona has been among the Exiles’ most impressive performers this season but the ease with which he crashed through the Quins defence on a short ball from Meehan will not have been to Gustard’s liking.

Smith’s fine try in response no doubt will have been – the outhalf converting for good measure – in what was developing into an entertaining encounter with both sides showing commendable commitment to play.

Irish thought they had retaken the lead when Hoskins forced his way over from close range. A knock-on denied the Australian however, and a similar score at the other end from Mike Brown allowed Harlequins to extend their lead to 17-7. Much to their credit given their travails of the last few weeks, Irish would not lie down and a try from the hooker, Motu Matu’u, before half-time kept the deficit to five.

Smith and Jackson exchanged penalties in the second half with the impressive Tom Parton going close down the left for Irish but Steele’s score, after Dombrandt’s powerful carry, initially appeared to be enough for Harlequins. They will be kicking themselves that it was not, but take nothing away from Irish’s superb finish.

“Tough is one word [to describe recent events]; it’s been frustrating,” said the London Irish head coach Les Kiss. “Everyone at every level is doing their best to get games played. Lads had to train at home and they deserve credit for making sure they stayed in great shape and ready for this challenge. It’s a nice reward to get three points out there and just a slight disappointment not to get four.” – Guardian