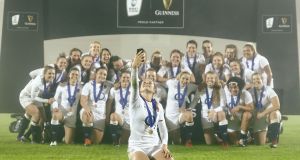 The Women’s Six Nations is set to be postponed as a result of the escalating coronavirus crisis at a time when uncertainty continues to hover over the men’s event.

Tournament organisers have been forced to concede defeat in attempts to stage the competition in its traditional February and March window, with April and May now pencilled in as an alternative, according to the PA news agency.

It means England will be denied the chance to mount their title defence until later in the year as the challenges over holding it alongside the men’s Six Nations, which is due to start on February 6th, prove insurmountable.

Only the champions are fully professional, with France semi-professional and the remaining sides – including Ireland – mostly amateur, creating difficulties over testing and bubbles at a time when lockdowns are in place across Europe.

A schedule had yet to be published and the announcement is expected this week.

The Six Nations are still hopeful that the men’s competition will take place as planned, despite France facing a possible travel ban from their government.

Organisers are attempting to convince French authorities that it can be played safely, even allowing for the the growing number of Covid-19 cases caused by the new strain first discovered in Kent.

Talks between the Six Nations, unions and French government will be ongoing throughout the week.

It comes as the fate of the European Champions and Challenge Cups hangs in the balance after the Top 14 teams were “invited” by Paris to cease cross-boarder competition.

Next weekend begins the first of the pool stage’s final two rounds and EPCR will discover early this week what course of action France’s clubs will take.

If they withdraw, the EPCR are likely to temporarily suspend the competitions.

“We are working hard to hold the tournament as scheduled in each country, with Covid protocols further reinforced from the October to November period that saw the successful conclusion of the Six Nations 2020 and the Autumn Nations Cup,” a Six Nations spokesperson said.