Munster back to winning ways after frantic finish out west 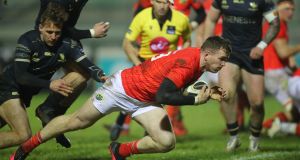 Not pretty, but effective as always. Munster prevailed in a game that only came alive in the last five minutes to rubber-stamp their leadership of the Pro14’s Conference B.

Johann van Graan’s men looked to have the game well and truly sewn up despite Connacht’s domination of possession and territory in the second half yet, with less than a minute remaining, Munster found themselves defending their line and their lead. With two players in the bin they defended superbly and in the end they squeaked home.

Connacht will be frustrated by failing to capitalise on their last opportunity but it was their failure to finish chances that was a telling statistic in the game. On seven visits to the 22 they had come away with nothing until two minutes from time when they eventually made the breakthrough – John Porch supplying winger Peter Sulllivan who touched down, with Jack Carty converting.

It was a frantic finish to what had been an intensely physical encounter in which Munster conceded more penalties, territory and possession, but had always held the upper hand both on the scoreboard and the physicality stakes.

The opening half was marked by Munster’s maul – too powerful for Connacht to stop on many occasions, and it provided van Graan’s side with most of their scoring opportunities.

Having been let off the hook when Carty missed a third minute penalty, Munster opened the scoring six minutes later. JJ Hanrahan made no mistake after Connacht were judged to have illegally stopped a maul, and the result was an early yellow card for hooker Shane Delahunt.

The maul provided the platform for their first try, giving Chris Farrell an easy try when the ball was sent wide. Hanrahan added the conversion for a 10-0 lead.

Connacht struggled to find an immediate response, but eventually found some rhythm, yet Munster’s defence led by Gavin Coombes, Tadhg Beirne and CJ Stander keep them at bay. A superb tackle on Peter O’Mahony had forced a knock-on just before the break. Porch created the move with a chip and chase and the result was a second opportunity from a scrum penalty - Carty nailing the three-pointer to narrow the gap to 10-3 by the break.

However, within three minutes of the restart, Hanrahan stretched the lead with a penalty and, although Connacht won a penalty which they sent to touch and Ultan Dillane was influential in the initial drive to the line, eventually Conor Oliver was wrapped up in the tackle and the home side were forced to exit their fifth visit to the 22 with no reward.

Connacht, however, dug deep, epitomised by Tom Daly who charged on Hanrahan to force the knock-on, but a lack of execution prevented them making any inroads on the scoreboard. The lack of cohesion played into the visitors’ hands in a game marked by huge hits and, as Munster continued to dominate possession, Hanrahan potted a 61st minute penalty under the posts to keep the scoreboard ticking over – Sammy Arnold the player pinged at the breakdown.

That should have been it for the contest but things turned on a yellow card for Rory Scannell after a succession of penalties for not rolling away. Connacht had a chance and quickly took it with Sullivan scoring their first try with just two minutes remaining. Carty’s touchline conversion brought Connacht within a score.

By the time Munster restarted there was just 30 seconds on the clock, yet a penalty conceded by the otherwise brilliant Beirne gave Connacht a glimmer of light. After a clean lineout and a frenetic series of attacks, Dillane came within five metres of scoring. Nick McCarthy was then penalised, setting up a dramatic finale with two extra in the scrum.

Alas, Connacht just could not make the huge advantage count and fittingly Beirne forced an error out of Marmion to finish the contest for a relieved Munster.