Connacht’s basement buys are proving to be bargains 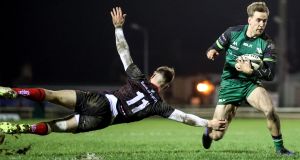 Not having the budgets of their competitors in the Guinness Pro14, never mind the Premiership and Top 14, Connacht have always had to shop for bargains from abroad and the other three provinces in supplementing an increasingly productive academy. It was ever thus.

Pat Lam used his contacts in New Zealand to break the mould a little with the acquisitions of Mils Muliaina, Bundee Aki and Tom McCartney, but Andy Friend has used his knowledge of his time with the Australian 7s to snap up some unpolished little gems.

The hitherto little known John Porch has been a revelation in his second season and there’s hopes that Ben O’Donnell can follow suit.

“For me Aussie 7s is a great nursery for talent because if you can be good at 7s on the world stage, one, you’re tough, two, you’re resilient and three, you’ve got skills. So I saw that in those two fellas,” said Friend this week.

“But as I keep saying to people, it’s a bit like shopping in Aldis, as opposed to Brown Thomas. We shop in Aldi because in the 7s market you pick them up pretty cheap, but then all of a sudden they get on the big stage and other people work out how good they are and I’m so pleased for that young bloke (Porch) because he is an absolute gent too and I’m pleased that people are starting to see his talent in the ‘15’ game.”

Alex Wootton, Sammy Arnold and Conor Oliver have flourished after joining from Munster, and likewise, Paul Boyle, who has already captained the side at 23, and Tom Daly in a well trodden path from Leinster.

From a little town in NSW called Cumnock (population 275) he made his 7s debut in Friend’s first game as coach in Wellington in 2016. “Who’s this bloke?” Friend asked manager Scott Bowen. “Ah little John Porch. We think he could be alright.” Porch was belted by a Kenyan player and immediately Friend could recognise his toughness and ability, informing a stunned Porch he was going to the Rio Olympics. The most minutes of any Connacht player this season, natural footballer, aerially excellent and a strong runner. More to come too.

In 2017 Friend was watching the Australian University team playing in the Central Coast. “This kid took off and he beat everybody, left-foot step, right-foot step, jinked, swerved, fended and scored from about 60 metres.” Friend asked the coach about him. An ex-Randwick outhalf, he’d been playing in the USA and Spain. Three weeks later he was player of the tournament and in 2018 was one of three shortlisted for World Sevens player of the year. A torn ACL delayed his debut until last week and will take time, but says Friend, “Benny is a beautiful footballer.”

From Auckland of Samoan descent, Papali’i played league in New Zealand, with the Sydney Roosters and in France before relocating to Bay of Plenty, where he was key cog in their Mitre 10 Cup side before being snapped up by Connacht.

Ala Jarrad Butler and Colby Fainga’a, he could be another gem and as Marcel Coetzee and Nick Williams have demonstrated, a big (6’ 4”, 125kg) ball-carrying number ‘8’ is invaluable in the Pro14. Sent off on his debut against Munster and has just completed five-week suspension for another red card against Zebre.

Born in Macclesfield (his family hail from Down) Wootton relocated from the Northampton academy to Munster’s after a year in 2013 and played for the Irish Under-20s in 2014, before joining Connacht on loan this season.

He has revelled in the greater game time afforded him at Connacht, where the wide-wide style of game also suits him. Friend regards him as a very astute footballer and a very balanced athlete, who carries well, sees space and knows his way to the try line - as evidenced by seven tries in nine games.