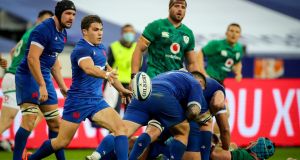 The French government’s instruction for rugby clubs to cancel cross border competition “in the short term” makes the postponement of the 2021 Six Nations a real possibility.

The coronavirus variant spreading across the United Kingdom and Ireland has already led to a travel ban into France which is expected to override a previous exemption for elite sports.

“We are working hard on going ahead with the championship as per the fixtures,” a Six Nations spokesperson informed The Irish Times. “We have reinforced Covid protocols since the autumn. As France does not play a UK team until week three, we still have a bit of time.”

Fabien Galthié’s squad are scheduled to play Ireland in Dublin on February 14th.

The French government has yet to agree that these new protocols, which include two rounds of testing, the second being 72 hours before kick-off, will be sufficient to stop the spread of the more contagious version of Covid-19.

"It's a puzzle, but I think we shouldn't be alarmed about the Six Nations tournament," said Bernard Laporte, the French federation president. "The tournament will be played with a health protocol decided by the government...I'm not that worried."

Bayonne were forced to cancel three recent fixtures due to positive tests that they claim were caused by the Leicester Tigers’ visit to the Basque region for the Challenge Cup match on December 19th.

“The French government is moving, in the short term, towards the adoption of measures to restrict or even prohibit the participation of French team sports in matches including teams from the United Kingdom,” stated the sports ministry.

“We are is writing to the National Rugby League (LNR) to invite it to postpone the next [Champions and Challenge Cup] matches including French clubs, in accordance with the wishes expressed by several professional French rugby clubs over the last few days.”

The Six Nations have rejected reports that they will copy last year’s NBA approach of hosting the entire tournament in one quarantined environment.

“The bubble is not an option,” continued the Six Nations spokesperson.

The women’s Six Nations is almost certainly going to be pushed back to April and May.

With Covid infections soaring in the UK and Ireland, the feasibility of completing the Pro 14 fixture list is also under review. The organisers still believe that cross border protocols between Ireland, Wales, Scotland and Italy remain sturdy enough to reach their March 27th grand final.

The subsequent Rainbow Cup, however, remains under threat as healthcare services in South Africa struggle to cope with the new strain of Covid.

The IRFU and provincial chief executives are in constant contact with their Pro 14 counterparts to reschedule fixtures that have already fallen foul of the virus, with Leinster versus Munster in Thomond Park, expected to be played on January 22nd or 23rd.

This could be confirmed as soon as the Pro 14, the IRFU and official broadcasters reach an agreement in the next 24 hours.

“I just said to the team we’ve got absolutely no idea what is happening,” Munster coach Johann van Graan stated after a 16-10 victory over Connacht at the Sportsground on Saturday night cemented their position on top of Conference B. “We haven’t heard anything official but credit to Pro 14 they have been really good in their comms so I guess, once there is a plan for the next few weeks we will know.

“Leinster versus Munster is a big occasion in Irish rugby so if the decision from Pro 14 is that we play Leinster in this gap we would be looking forward to it.”

Another option is to give the provinces some time off as most of the staff have been working flat out since professional rugby returned last August.

“I am not going to lie to you, it is not ideal,” Van Graan continued. “But our theme since this lockdown started way back in March is ‘change or be changed’. We know that change is the only certainty at this stage. We are so lucky to be able to play rugby. When we drove in today we said hopefully, as four provinces, at least we are giving people an out for their mental space.

“It is about doing what we love and we are certainly doing that. We have such empathy with everybody and we just got to make sure we all get through this. It is so serious, and way more important than rugby so if we can play any part in putting a few smiles on peoples faces that is great.”

Munster held on in Galway after a decision by Connacht number eight Paul Boyle to carry off a five metre scrum in injury time despite his backline having a two man advantage due to yellow cards for Rory Scannell and Nick McCarthy.

“With 15 men again 13, a five-metre scrum, we did the one thing we didn’t want to do,” said Connacht coach Andy Friend as the result leaves Munster 11 points clear in Conference B. “It is definitely not a lost cause.”

Friend did agree that the anxiety being heaped upon his staff and players is an increasing concern.

“It’s literally every week you work day by day and it does take its toll,” said Friend. “I’m speaking on behalf of everyone here at Connacht rugby in terms of our staff and players. It has been a long six months. Yes, we are still playing and, yes, we love what we do and the uncertainty is nobody’s fault but all I’m saying is that it does add stress to things.

“It’s not just at Connacht, it’s at every other Pro 14 and European team out there, so the quicker we can get clarity on what the next few weeks look like, I think it’s going to be better for everybody.”

Unfortunately, clarity is no longer a luxury that elite rugby squads can cling to.

“I understand that and I’m not having a shot at anyone,” Friend added. “It’s the reality of what we’re living in at the moment, it’s tricky times. We will all look back in a few years’ time and ask how the hell we got through it.

“We’ll say it was bloody hard but we got through it. Listen, it is what it is. We said to the boys to go home, look after themselves and we’ll let you know as soon as we know.”