The province have announced 21 deals, four of which are players moving to senior status 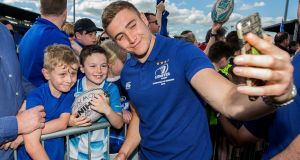 Jordan Larmour is among four former Leinster Academy players to be awarded senior contracts for the upcoming season.

The news comes as the province announced 21 new contracts with Vakh Abdaladze, Ireland under-20 captain Caelan Doris and Josh Murphy the other four players to have reached senior status after coming through the ranks.

Tadhg Furlong and Rob Kearney are the two players on the list to have signed IRFU central contracts with head coach Leo Cullen saying: “This is another significant announcement and a huge endorsement of the work being done at grassroots level by the domestic rugby team, the CROs and the CCROs on a daily basis across the 12 counties.

“Of the 21 contracts announced today 18 came through the Leinster Rugby system and played in clubs and schools around the province.

“It is also great to see four players promoted from the Academy in the last few months and they will all start next season in the Senior squad.

“Jordan Larmour has grabbed a lot of the headlines given his involvement with Ireland during the Six Nations and starting last weekend but Vakh Abdaladze, Josh Murphy and Caelan Doris have all made telling contributions for both Leinster ‘A’ and the Senior side in the Guinness PRO14 during the course of the season.

“I am delighted for them and indeed their families and congratulate them.”

1 Gordon D’Arcy: Losing such a big game shines a very harsh light on certain players
2 Meet Liverpool’s throw-in coach who aims to ‘change football’
3 Ken Early: Like Napoleon, Mourinho is the outsider always trying to prove himself
4 Seán Moran: Fallout from Tyrone final celebrations will concern GAA
5 How Dundalk’s opponents Sheriff started on wrong side of the law
Real news has value SUBSCRIBE