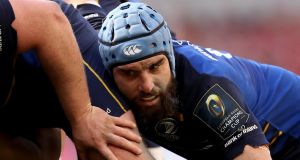 What does it take to complete a nine-dart finish? In his entire career legend Phil “The Power” Taylor has managed it on TV a miserly (but record) 11 times. A 501 from nine darts, including a double finish, is some effort.

So is nine straight wins in Europe.

Leinster are capable of the same on Saturday, where I note Stuart Lancaster’s reflections on Johnny Sexton centred on “his ability to keep calm and composed, to think things through and solve the puzzle while in the game”. This is true of Sexton but it is, more importantly, true of the entire team. Many dogs replicate their master, and it’s no coincidence that Leo Cullen is that calm, composed problem-solver.

What separates Leinster from the other eight teams they have beaten so far is an ability to problem-solve whatever’s been thrown at them, whatever match, whatever time in the match, and whatever the score of the match; but especially when not playing their best (lots of examples). Even so, beating Racing 92 will require Leinster to solve a multitude of problems.

Munster did all in Europe a huge favour in knocking out Toulon in Thomond, but in Bordeaux they did themselves no favours. They had vast quantities of possession and field position but were lacking; CJ Stander carried a mammoth 21 times making an average 1.28m per carry. Maybe at this stage of their journey Munster have one way that works and when it doesn’t, it doesn’t. However in not working they’ve shone a light on Racing, who appear to have various ways – such as their lineout and beefy ball-carriers – but if Racing close the corridor of power Leinster will quickly open another corridor.

At the heart of Leinster is a combination of a deep understanding of their game plan. As noted recently, in full flight it’s the closest thing to Cirque du Soleil that rugby can offer.

All the constituent parts are capable of execution at full throttle, where timing akin to an acrobat flying in the air requires pin-point precision with terrible consequences should the ball not go to hand – but it so often does.

It is especially potent as they manage a multitude off two simple plays; with built in options. Essentially, they know the two plays intimately, and it’s only a matter of which option to pick.

Which brings the next level – and that old chestnut: Leinster’s possible team selection laid out over Racing’s. The two Laurents (Labit and Travers) will then go man-for-man with each and conclude – as many will – that they are better, more powerful and at least as fit and skilful as each Leinster counterpart. This is an error.

The individual rugby knowledge of each Leinster player is vastly superior to all else in Europe. How else did the current holders of the English Premiership, the leaders of the Top 14 and the European Champions all fall? And Racing’s physical fitness will be sorely tested, impacting their mental fitness.

Where I have concern is within the Leinster backrow. There’s no way any team can function without Sean O’Brien, Jamie Heaslip, Rhys Ruddock, Josh van de Flier and Jack Conan without losing options.

Against Saracens and Scarlets Leinster’s backrow was immense, especially sealing off Scarlets and tying in Saracens, guaranteeing the gainline; an effort that afforded such ease for scrumhalf Jamison Gibson-Park and Robbie Henshaw out wider.

Fardy is possibly the best rugby brain in the Leinster squad. I’ve noted countless times his impact on intricate Leinster moves that usually involve Tadhg Furlong, decoy runners and a flying winger scoring in the corner. He is so smart in managing space whether he has the ball or not.

So clever are his running lines he is probably the best impact on any team’s play when without the ball. But on Saturday Leinster may need Fardy and his backrow carrying in heavy traffic.

For all of Racing’s lineout prowess I’m not worried for Leinster’s lineout, but I do find myself imagining Leister’s scrumhalf arriving to crap, slow ball where he takes five-plus seconds to dig it out as Racing’s defence realign in comfort.

Also imagine that the subsequent timing of Henshaw’s powerful line is totally skewed, entirely stunting his impact so he doesn’t get across either. What then?

These are the very problems Munster struggled with, but Leinster, having seen the impact of Racing’s fringe defence on Munster, will have a plan – go to the air is one but there are others. Move the point of attack wider (ah, wouldn’t O’Brien be handy for this problem?). Or if you can’t get it wider wouldn’t Ruddock be handy for some Matrix-style crowd control.

It’s final day, and those backrow losses are real, and will impact on Leinster’s options. Yet that is the very reason why Leinster will win, because they are the best in Europe at solving these problems.

And Fardy is at the heart of same. Will his rugby brain, Jordi Murphy’s superb technique and Dan Leavy’s battered head solve the French problems long before they become Sexton’s?

As for Sexton, the Racing reshuffle from scrumhalf Maxime Machenaud’s injury could place an entirely more challenging aerial-orientated back three for him to navigate. And the finishing Racing scrum will be more potent than Connacht’s scrum, so watch out.

But in answer to the Laurents’ team comparison. They may argue that Racing are man-for-man stronger and more powerful, but they’ll have to plan for Leinster’s brains and their unique 80-minute Leinster pace.

Leinster may not have seen the exact problems Racing will present but they’ve the players to provide solutions for a nine-dart finish.