Liam Toland: Simplicity of Leinster’s ruthlessness the key to success 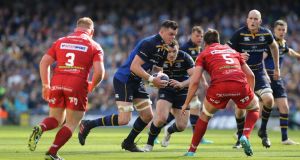 James Ryan in action against Scarlets. Leinster are ruthless in their support of their ball-carrier. Time and again the Leinster ball-carrier entered contact on his terms. Photograph: David Rogers/Getty Images

Due to a tardy start on Sunday morning, I listened to the first half of Munster’s European champions Cup semi-final against Racing 92 on my car radio before landing in Limerick for the second half on TV.

All along the M7 I wondered why were Munster not taking the scores being presented. They were obviously shell-shocked in the opening quarter but that they lost all their historical cup muscle memory in the second quarter was bizarre.

Much malfunctioned: the lineout, the attack but especially the go-forward where I was shouting at the radio; ‘take your three points’.

Were they and Scarlets fooled into thinking their game would bully and dominate their opposition’s where tactics are irrelevant once they imposed their will.

Prior to kick-off, Racing had beaten Europe’s defenders by 161 to Munster’s 94 and with Teddy Thomas floating those numbers were a real worry. Paradoxically, Munster actually beat Racing defenders by 21 to 18 on the day.

Other numbers looked good too; possession favoured Munster by 69 per cent to 31 per cent and territory stats were even better. However there’s no stat for speed of recycle and go-forward momentum.

Much has been made of Ian Keatley but on Friday I noted Jean Kleyn would have to be the beast of Bordeaux. Had Kleyn limped off then the Munster team would have no growler or no enforcer; but one is not enough in semi-finals. It’s no secondrow coincidence that the winning teams had more.

Kleyn has been the key exponent of physicality, smashing violently, carrying the crap ball or latching on to the vulnerable carrier. In fact latching on is where I want to review last weekend.

There was a common denominator in both fixtures between Scarlets and Munster. To understand same I’ll start with Leinster’s approach.

I have no stat for it but as noted on Friday, I felt Racing would tire, under the correct conditions. Leinster understood and executed their stats and Munster/Scarlets did not.

In their own half Leinster mauled wherever possible as they did for their opening lineouts. But as soon as they crossed the half way line they adjusted with two ‘simple’ plays; one off their lineouts and one off their scrums. The lineout play was a down and out from the catcher with the front of the lineout peeling around the tail. The catcher, Scott Fardy on landing popped the ball to James Ryan who found his scrumhalf Jamison Gibson-Park.

At this stage there was heavy traffic between him and his backline. This was a ruse. On the first play Gibson-Park thread a beauty through to Johnny Sexton with Leinster cutting Scarlets open for Ryan’s ultimate try. But for the latch-on by Jordi Murphy; no try.

Each time Leinster arrived into Scarlets half they pulled the same move but with variations built therein. Ditto their scrum where on the right side they got the gainline with their forwards circling around the far side; Fardy carried across the gainline with Garry Ringrose preordained latching on, all leading to Cian Healy’s try. Then in the second half they went to a kicking game, keeping Scarlets pinned in.

At the core of Leinster’s plays are two key fundamentals. Firstly, Leinster’s timing and precision is akin to Cirque du Soleil. One ‘simple’ move with variations executed with total ruthlessness by a group who all contribute to every detail in the outcome such as Robbie Henshaw and Ringrose’s phenomenal and selfless decoy lines leading to Ryan’s try. They are currently the most knowledgeable team in the details required to execute.

Secondly, and with a mind to Scarlets’ breakdown steals, Leinster are ruthless in their support of their ball-carrier. Time and again the Leinster ball-carrier entered contact on his terms; Henshaw was one example but for him to have such front-foot ball he required the men inside him to dominate their contact.

The recycle was ridiculous and Gibson-Park will have less easy days.

Each Leinster carrier either dominated the contact or if there was the slightest hint of a Scarlets infiltration the next blue jersey (back or forward) latched onto the ball carrier to ensure he crossed the gainline and that Scarlets had no possibility of a James Davies, John Barclay, Aaron Shingler or Tadhg Beirne getting multiple steals. This requires huge knowledge, selflessness and skill to adjust to the ball carrier’s greater needs.

Conversely, Scarlets and Munster allowed their ball carrier to enter contact on their own; in Scarlets’s case they expected an offloading game so didn’t resource (or adjust) to their carrier.

Scarlets’ ineffectiveness was caused by an inability to resource their ball carrier, ditto Munster, and the subsequent inability to adjust to the environment presented to them.

Neither team had the simplicity of Leinster’s ruthless approach, nor the ridiculous team knowledge to execute. But moreover neither have Leinster’s ability to adjust, twist and turn their tactics, tempo and tenacity to nullify the opposition before imposing their game to win. The real disappointment for Munster; Racing are beatable especially when fatigued.