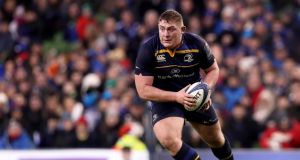 Tadhg Furlong has already ticked plenty of boxes in his career. At just 25 he’s already established himself as a worldc lass tight-head in drawing a series against the All Blacks with the Lions and winning a Grand Slam with Ireland. But Saturday’s final offers something else again, and would be rank alongside anything achieved so far.

A mere colt on the outside with the sub-academy and then full academy when Leinster won their European Cups in 2011 and 2012, Furlong has since played 81 games already for his province, but none will be on the scale of this final against Racing 92 in Bilbao.

“Without question it’s my biggest game for the province. Coming in as a young fella you saw teams win; in 2011 I was in the sub-academy, and in the academy in 2012. I suppose you never really felt part of it, because when I came into the academy I had a long lay-off with a shoulder injury. I wouldn’t have trained with the seniors. I would have been in early and out early.

The prize at stake is a cherished fourth star on the Leinster jersey, moving them alongside Toulouse as the most successful side in the tournament’s history.

“When you talk about adding a star to the jersey, and be a part of something special like teams before us, that’s what drives you on to try to get better when you come into work every day.

“When it comes to the week of the game you’re literally just focussing on – I know it sounds boring but it’s incredibly true – your job, trying to maximise your preparation, leaving no stone unturned, and getting yourself in the best physical and mental state to go out and play a game of rugby on the weekend.”

“Representing Wexford means a massive amount to me. I understand it is the route less travelled. I have got incredible support from the club back home in New Ross, from the people of Horsewood and Campile over the years.

“You flicker back and you know that and you don’t want to let them down, and that means a lot to me. And for Leinster we have people from all over the place. We represent different parts as a collective, and there is that parochial GAA sort of thing. We are from here, we play here, and it means a massive amount to us.”

He has also inherited the number “3” jersey from Mike Ross, who anchored the scrum in those 2011 and 2012 finals. Ross took Furlong under his wing and remains a key influence.

“I’m really good friends with Rossy. I chat to him still. You came in and you didn’t have to go looking for Rossy, he came looking for you. He’d go looking for clips of you playing for Clontarf when I moved up first to play a bit of AIL, just to go through stuff with you. Rossy was a hell of a scrummager, and a really helping hand into the game.”

Still, there’s nothing like learning at the coalface, and like any player, and especially a prop, he has had his difficult days too, such as his fifth cap for Ireland, all off the bench, when coming up against Saturday’s opponent Eddy Ben Arous.

“It was a tough day for me,” he admits, “but when a young prop maybe doesn’t have a great day what you say to him is don’t try and rip up the script, don’t try to change everything. Just tweak one or two things, learn your lessons, understand the feeling and how you can fix that at a scrum or how you can fix that one-on-one. Don’t get too carried away by the highs but don’t get too carried away by the lows either.”

Racing’s upward graph this season has been encapsulated in their three meetings with Munster, which serve as a warning to Leinster.

“They’re a really dangerous side. They have a big pack, and their lineout defence is excellent as well as a very good scrum. Out wide they have X-factor game-breakers. If you get loose or knock off they can hurt you.”

Many players from last summer’s Lions tour have shown signs of fatigue this season, and Furlong admits there have been “challenging times”.

But the Irish game management has limited him to 21 games this season (14 for Leinster, and seven for Ireland), and he feels mentally refreshed after just two days training last week. Nonetheless, Racing’s cast of seven test props has also helped lighten the load for Ben Arous, who has played 25 games this season – 19 for his club and six for France.

It comes as no surprise that Furlong is very relaxed for much of the week before the nerves kick in on match days.

“You’re so tappy and fidgety and you’re just ready to go in a way. I don’t think I’d like to stop myself doing that because it’s nice to have that nervous energy and sort of knowing there’s a big game coming in 20/30 minutes.”

This will be even more inevitable on Saturday, with the prize akin to a Grand Slam.

“No, it is a toss-up, to be honest with you. I probably would have eyed trying to succeed at a Champions Cup for longer than I would have tried to envisage a Grand Slam because I came through the academy and I wasn’t playing with Ireland. You see your peers do it. They’re two different feelings in a way. But I don’t know, it’s a hard question to answer.”