Liam Toland: Ireland must speculate to accumulate in future 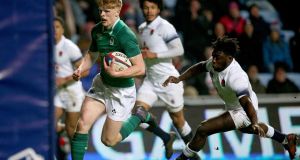 Ireland U-20s Tommy O’Brien scores a try against England at the Ricoh Arena. “I suspect that the environment engendered in the Irish U-20 camp will ultimately provide the better end product.” Photograph: Tommy Dickson/Inpho

I recently came across Daniel Makepeace’s words and was immediately struck by the simplicity of his argument: “Athletic kids; you will eventually reach a level where your athleticism, speed and strength is matched. If your skill set is poor. You’re done”.

He’s an American skill development trainer who rarely focuses on winning championships but focuses on playing like champions. His words were echoing in my mind all week as I’d just returned from Old Crescent U-18s’ visit to Lisbon for the Portugal Rugby Youth Festival 2018.

I wonder aloud about the acceptable ratio between skills and errors; risk versus reward if you will. Or better still risk versus no reward. Or risk now for future rewards.

For elites, or like us amateurs on the sidelines in Lisbon, what is the answer? Or maybe an even better way of framing this golden ratio question is – what is the acceptable ratio between skills and errors in the formative years of a developing player that will, in time, reap massive reward at the elite levels of Six Nations and Rugby World Cups.

As I stood there on the sideline, with the rain pummelling down on top of us all – yes storms in Lisbon! – I was conscious of the streams of instructions from all quarters (team-mates, parents, coaches) flowing onto the pitch. The usual, mostly ‘encouragingly critical’ of some action or non-action in an attempt to ‘improve’ the players.

On reflection, I generally stay quiet during games and I wonder why this is?

Is it because I’m not sure what to say, lack knowledge or is it because I don’t fear losing in the way others do (the win-at-all-costs mentality).

Or is it that I’m happy for players to figure it out whilst giving minimal guidance; reserving deeper guidance for the post-match ‘hot-wash’. It’s perhaps a combination of all three, I conclude, but I’m happy with that.

The true source of my happiness is our U-18 Joshua Fitzgerald stealing turnovers or number eights Ronan Kiely or Oisín Evans packing down into the scrum, on their try line having noticed that the opposition blindside winger is out of position. And with that knowledge nods to his scrumhalf and off they go attacking the space.

But how many times might they mess up their decision or execution before arriving into the professional game?

At the heart of this golden ratio is what looks good now may not be what’s needed later especially when it is athleticism, speed and strength that’s giving the edge to the outcome as can be witnessed every week in the underage structures, be it school or club.

That’s why I loved watching Glenstal Abbey’s march to their first ever Munster Senior Schools Cup – and the Irish U20s. Both clearly have structures and both enjoyed varying success/failure from same but both clearly revelled in the environment, engaging in fresh thinking around the ball.

Ireland U-20s have played nine matches since being beaten by Italy last May. Including that match, Ireland U-20s have lost six matches of the ten played which may be deemed a failure. But, a little like the Kerry minors in the GAA, if losing games provides quality thinkers and problem-solvers then then senior All-Irelands, Six Nations etc will follow.

Ireland U20s’ last match was a heavy defeat – 48-15 – to England. I urge you to track the players involved. How many of those English U-20s will make it to the full cap and, when there, will be capable of problem-solving? Ditto Ireland U20s. I suspect that the environment engendered in the Irish U-20 camp will ultimately provide the better end product. Why? They looked so much happier/comfortable making mistakes.

Back in Lisbon our final game of six was against St Andrews from South Africa. I don’t know their travel regime and curfew rules but they were powerful, athletic, really well-drilled and full of energy in that final game where backrower Mark McMahon received the best hit I’ve seen all season. To be fair, the St Andrew’s player in a most gentlemanly fashion straddled up to Mark enquiring ‘are you okay after I smashed you?’

The tour itself was wonderful and all played a significant part in the six matches. Not winning the tournament was a disappointment but the tour was a total success; winners in so many more ways. What is success? All, including the parents and management, sang a song, recited a poem or paddled.

Like last year the travel arrangements were akin to Tom Crean’s and Sir Ernest Shackleton’s South Pole odyssey. Our reward on arrival was a two-hour surfing class in the stormy Atlantic Ocean with Gearóid Herbert standing up for the briefest of moments!

The craic on the bus where players’ confidence grew, the amateur ethos, the team bonding between adults and players, the total space or the tolerance of errors on the pitch leading to a deeper understanding of how this marvellous game is played will not only benefit this bunch for the rest of their lives but, for those who may break through into the elite game, will make for far more rounded rugby players.

In essence, the results were secondary; especially when you witness tour doctor, Matt Kiely, struggle with Hickory Dickory Dock and hear the final song of the tour; Patrick ‘Hassa’ Hassett belting out Stand Up and fight.

1 Monica Seles: The warrior queen who could have been the best ever
2 Sport crosses its fingers yet again as ministerial merry-go-round gets another spin
3 Matt Williams: Six Nations must recognise the desire for revolution outside Europe
4 Aidan O’Brien targets historic eighth Epsom Derby win with strong hand
5 Michael Walker: Ian Baraclough staying on trend, from Sligo to Windsor Park
Real news has value SUBSCRIBE