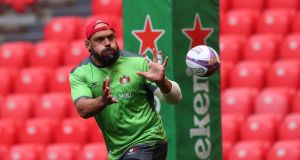 John Afoa at the Gloucester Captain’s Run in San Mamés Stadium in Bilbao: “We’ve lacked a little bit of intensity in the last few games but there is no point worrying about the last few weeks. It’s all about trying to lift the trophy.” Photograph: Billy Stickland/Inpho

Gloucester have prioritised performance over results since Johan Ackermann took charge in August, but their season will be defined by the outcome of their final match of the campaign. Green shoots of recovery have been clear under the South African head coach, but a second consecutive Challenge Cup final defeat, when they face Cardiff Blues in Bilbao on Friday night, would suggest they have wilted.

Champions Cup rugby has been secured for next season – and that may go some way to explaining two heavy defeats in the final two weeks of the Premiership – but silverware is required to validate the sense of purpose Ackermann has brought to Kingsholm.

To that end, Gloucester may have to tighten up a little. They have taken to the freedom afforded to them by Ackermann but, as departing All Black prop John Afoa says, a dose of pragmatism may go a long way against the Blues.

“We’ve lacked a little bit of intensity in the last few games but there is no point worrying about the last few weeks,” he said. “It’s all about trying to lift the trophy. We have this brand of rugby we want to play but when it comes to finals, maybe we need to be a little bit smarter.”

Afoa is in no doubt, though, that Gloucester are on the up. The 34-year-old brings the curtain down on four seasons with the club in Bilbao and, while things have not exactly gone to plan since he became one of the Premiership’s highest-paid players after moving from Ulster in 2014, Afoa is convinced he leaves the club in a better position than he found it.

“We’ve always had a strong squad but maybe not had that last 5 or 10 per cent,” he said. “Johan has come in and given the boys confidence and freedom. We’ve played without the pressure on ourselves to win a certain amount of games or finish so high up, we’re playing a brand of rugby that we’ve wanted to and stuck to it.”

Afoa joins a burgeoning New Zealand contingent at promoted Bristol next season – teaming up with the head coach, Pat Lam, as well as Charles Piutau and Steven Luatua. The standing ovation he received in his final home match, against Bath – which included an outrageous back-of-the-hand offload – is testament to how much he will be missed.

“Everyone remembers their last game and it would be great to leave the boys with a win,” he said. “I’m just glad I’ve left a positive impact on and off the field.”