Cork Constitution taking nothing for granted as they face Lansdowne

Defending champions are ‘going to be very much underdogs’, says coach Brian Hickey 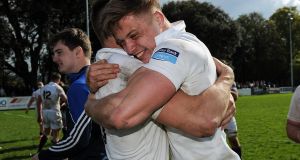 Cork Constitution head coach Brian Hickey says his side are “very much underdogs” heading into next Sunday’s Ulster Bank League final, despite the fact that the defending champions are approaching their third successive Division 1A decider.

Cork Con will renew rivalries with Lansdowne after defeating semi-final opponents Terenure College 22-15 at Lakelands Park. Outhalf Tomás Quinlan impressed again with a 17-point tally from the tee, while Munster “A” back rower Evan Mintern, who was sprung from the bench, crossed for a second-half try.

The result sets up a repeat of the recent Bateman Cup final which Lansdowne won convincingly (32-12) at Temple Hill. Their hopes of a second successive All-Ireland double may be over, but Hickey’s troops could still make history next weekend as they target a two in-a-row – something which has not been achieved in the league since Shannon did so in 2006.

“It’s great to be back in the final,” he admitted. “I’m very proud of the fact we got to the top four and are now back in the final. It’s a very hard league to win and I’ve always said to the players that I think the importance of being a champion is how well you defend your trophy. That’s something I think good champions do. They put up a good defence.

“It was suggested that we were a bit tame [in the Bateman Cup final] and that hurt. I don’t think that gave credit to the performance of Lansdowne. We’re going to be very much underdogs. They’re a seriously good side, playing on their home patch [at the Aviva], but we’re delighted to be back there. Absolutely delighted.”

Con leaked two tries to Terenure’s much-vaunted attack, as backs Robbie Carroll and Jake Swaine touched down in either half, but Hickey felt his charges did well to “limit Terenure’s opportunities, weather the storm and close out the game quite well”. It was ’Nure’s second home semi-final defeat in four seasons, and a bitter pill to swallow given their fight to finish second in the table.

Constitution’s main injury concern for the final is experienced scrum-half Gerry Hurley who suffered an injury in the warm-up on Saturday. Hickey says the Midleton man has “a fighting chance”, but noted that Jason Higgins “played very well” against Terenure. Michael Bradley’s son Gary was brought onto the bench as the reserve scrumhalf.

Four second-half tries fired Lansdowne into their first league final since 2015 and they are 80 minutes away from a coveted All-Ireland double after overcoming Garryowen 36-19. Lightning-quick winger Adam Leavy started and finished the try-scoring, with the hosts adding a penalty try and efforts from Alan Bennie and Tyrone Moran.

Conan Doyle’s Light Blues deserved to be closer on the scoreboard, brothers Neil and Liam Cronin combining for their only points, including the latter’s 75th-minute try. It was still a fine season for the Munster Senior Cup champions given they were in relegation trouble 12 months ago.

Paul Kiernan’s ninth try of the campaign, meanwhile, catapulted UCC into Ulster Bank League Division 1A for the first time, while a busy day of play-off final action also saw Ballina regain the senior status they lost in 2005, and there were back-to-back promotions for City of Armagh and Navan.

Banbridge failed to win against UCC for the third time this season, going down 15-10 to Brian Walsh’s College side with flanker John Hodnett and captain Kiernan crossing for the visitors’ tries. UCC join Division 1B champions Shannon in going up, meaning there will be five Munster clubs in the top flight next season.

Nenagh Ormond fell at the final hurdle for the second successive year as City Armagh swept past them in the Division 1B play-off decider. Willie Faloon’s men triumphed 33-23 at home with talented young outhalf Cormac Fox kicking 18 points. Another number 10 was the match winner for Navan who watched Willie Staunton land a late conversion to seal a thrilling 16-14 victory at Rainey Old Boys.

Belfast Harlequins steadied the ship and avoided a third straight relegation with a 26-20 home victory over Omagh. ’Quins outscored their Ulster rivals by three tries to one in the second half, as prop Rory Harrison, who crossed from a lineout maul, replacement winger James McConnell and centre Mark Gribben all touched down.