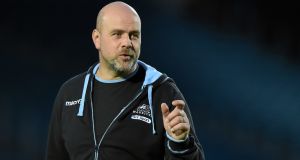 Dan McFarland has been appointed as the new head coach at Ulster. Photograph: Stephen McCarthy/Sportsfile

McFarland has signed a three-year contract and will take over from New Zealander Jono Gibbes at the start of next season.

The news comes two days after Ulster missed out on a place in the Guinness Pro14 Final Series with the province facing a play-off with Ospreys for a place in the European Champions Cup.

The Scottish Rugby Union says Englishman McFarland will remain in his post until January while they seek a replacement.

McFarland told his new club’s website: “I am really excited that I will be taking on the Ulster head coach role. I know first hand from my years visiting with Connacht and Glasgow the passion and fervour that makes playing in front of Ulster fans so special.

“It’s a club with a great history and I welcome the challenge of being a part of their future.”

McFarland spent almost a decade in the Connacht coaching ranks before moving to Glasgow in 2015.

The SRU revealed McFarland would leave the national set-up in mid-January as he serves a nine-month notice period during their recruitment search.

Worcester head coach Carl Hogg has been drafted into the Scotland set-up on an interim basis and will share forwards-coaching duties with McFarland on their summer tour of the Americas.