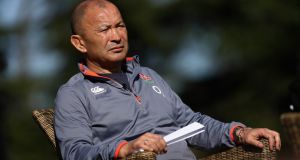 Beware: The English superiority complex has been figured out by an Australian, mate.

One more bound and they are free. All hope is lost. Despair turned to a deep foreboding after this latest Eddie Jones tutorial.

A few days before England put 61 points on Scotland, Jones sat his players down in Oxford, intelligentsia capital of the old empire, to explain the benefits of arrogance.

“We had a bit of a cleansing meeting in Oxford,” says Jones who, incidentally, was born in Tasmania, but raised in a tough Sydney suburb linked to the Randwick club.

“We reset our minds a bit. You can feel it in the team that there is a different intensity about the way we do things. I always thought we were going to play well against Scotland and I think we’ll play better this week.”

Really, this is not arrogance, more supreme confidence, from the man who unexpectedly guided two nations into World Cup finals, before concocting Japan’s plan to dismantle the Springboks.

Then Jones turned his angelic gaze on England, transforming them from World Cup lambs to the second-best team on planet Earth. All in 16 short months.

“It’s just about accepting that we’ve been successful,” he explains.

“The English character, I don’t like to talk about it because I am not English, but to me they are quite reserved and they actually struggle a little bit with success.

There it is. Modern England on the cusp of immortality.

“How many opportunities do you get in your life to beat Ireland in Ireland and win back-to-back Grand Slams?

On St Patrick’s Day as well, someone ventures.

Jones rarely misses a beat. This serene Monday presser was a rare treat, as whispers about fallings out with the English correspondents instantly disappeared.

But plenty of gentle digs are administered.

“What’s he going to tell us, the name of their runaround moves?”

Simple: when Johnny Sexton’s loops the loop, England will smash everyone involved, be that Fergus McFadden or Garry Ringrose or the man himself.

Speaking of Johnny, the 57-year-old had no interest in reigniting that squabble.

“I think that’s done and dusted, mate. I apologised for it afterwards and I stand by that. I haven’t spoken to him. I won’t speak to him this week. I’ll let him get on with his preparation. I’m sure he doesn’t want to speak to me. He’s an excellent player, we respect him greatly.”

On to the father and son, as Owen finally faces an Andy-drilled defence. Jones shrugs his shoulders. “They have been talking about rugby since [Owen] was big enough to sit at the dinner table. They are both mature enough to get on with it. They don’t need any more motivation to do well this week.

“They are Farrells. I think that sums it up.”

This sitting with Jones in leafy Pennyhill Park, on a gorgeous spring afternoon, inevitably topples into hilarity. The showering of praise from All Blacks coach Steve Hansen – having equalled their 18 game win record – was viewed with suspicion.

Hansen looms over this fixture nonetheless. Ireland denied New Zealand 19 straight victories in November, while Jones repeatedly states that knocking them off their perch is the primary ambition come October 2019.

“I obviously watched that All Black game [in Chicago] a number of times, because you can learn a lot. Any team that beats the best team in the world does a lot of good things. But that was in November. Now it’s March, they have played six games since then, they have a 50 per cent win record since then. They are capable of playing really well, but it is our job to make sure they don’t play well.

“Our desire is to be the best team in the world. We don’t need any external motivation. We get our motivation from wanting to be better every day.

“Physically we will be better. We have spent eight weeks preparing to be at our absolute physical peak this week. We weren’t at our physical peak last week.”

He means what he says. He really does.

“Disappointment builds up aggression. We have seen how Wales came back after the Scotland game. We expect Ireland to be like that, but we got to be better than them, more aggressive, more emotional in the right way, more committed and we got to be smart and skilful.”

The end comes with a straight jab that reopens an unhealed wound.

“It’s going to be raining high balls. The old kick and clap. The fans at Lansdowne Road love it. Well, it’s not Lansdowne Road. They have a new sponsor, what’s it called?”

Like any classroom under the firm control of a brilliant disciplinarian, the answer comes back in unison.