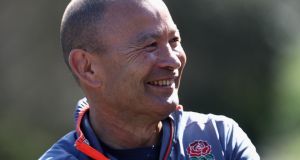 Eddie Jones made a rare appearance of a Monday before a Test Match, but not just any old game, as England close in on the 19 wins world record and the chance at “greatness” as the first team to become back-to-back Six Nations champions.

“We haven’t got anything to celebrate yet,” said Jones despite England clinching the title with a game to spare after Saturday’s 61-21 destruction of Scotland.

Regarding Ireland, Jones expects a backlash in Dublin on Saturday evening similar to what Wales produced in Cardiff.

“They’re an extremely well coached side, they’ll be grossly disappointed by their performance on Friday.

“I’ve just been reading all the predictions at the start of the tournament and a number of people tipped them to win the competition.

“They were favourites, they haven’t won the Six Nations and they’ll be carrying the expectation of their country to do well.”

On the injury front, Wasps winger/centre Elliot Daly is expected to recover from concussion. Otherwise Jones will select from a fully fit squad.

“Last year we were nervous and I expect us to be nervous this year. It is a big occasion. You don’t get a chance to win a Grand Slam back to back too many times but experience helps. The players have experienced that the year before so I’m sure they will cope with that.

“Every year is difficult. There’s a perception that this year has been better and it probably has been, but you’ve still got to win and to win it you’ve got to stay undefeated. You have to be around your best for five games in a row. That’s an achievement.”

Selby strikes back against O’Sullivan 18:44
Up to 25 Stade Francais players and staff reported to have tested positive 18:20
Ter Stegen v Neuer: Barça v Bayern a proxy war for Germany’s number one rivals 17:58
He Knows No Fear lands 300-1 shock at Leopardstown 17:20
Ciara Mageean targets Irish record as Diamond League resumes 15:52
Crossword Get access to over 6,000 interactive crosswords