A win for England in Dublin, and a Wales win in Paris would be very bad news for Ireland 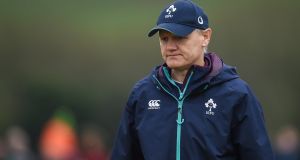 Ireland head coach Joe Schmidt knows that there is more than just pride on the line this weekend in Dublin. Photograph: Getty Images

Ireland are facing the very real prospect of falling back to fifth in the World Rugby rankings if results go against them this weekend.

A fifth place finish would mean they will face New Zealand, England, Australia, or Wales if they were to overtake them into fourth spot, in the 2019 Rugby World Cup pool stages.

The draw for the next World Cup is to be made in May, with the final Six Nations outing against England on Saturday being Ireland’s last fixture before they face the USA in June. So this weekend is Joe Schmidt’s team’s last chance to secure, or lose that fourth place top seeding.

If England claim the Grand Slam with a final day win over Ireland in Dublin, and Wales beat France in Paris, then the Welsh will move into fourth.

Wales’ 22-9 victory over Ireland last Friday has put them virtually one rating point behind Ireland (1.02) in the World Rugby rankings.

France have plenty of motivation too however, a win will guarantee them their place in the top eight and a place in the second bands of seeds for the World Cup pools. Nudging Argentina back to ninth.

Scotland are currently in fifth, but a win over Italy will not be enough to move them above Ireland.

Conor O’Shea’s Italy have now lost 10 in a row in Rome and a further loss of rating points has seen them slip one place in the rankings to 15th with Samoa the beneficiaries.