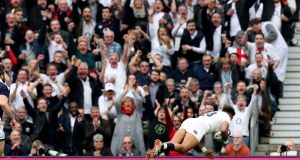 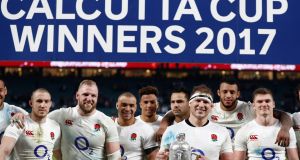 England’s Dylan Hartley and team-mates celebrate with the Calcutta Cup after victory over Scotland at Twickenham. Photograph: Stefan Wermuth/Livepic/Reuters

Back in the early 1980s, there were few more futile things a man could do than try to pursue a career in competitive squash. Because to be the best, you had to beat Jahangir Khan. And between April 1981 and November 1986 Khan won so many consecutive matches that even statisticians lost track of the exact count.

Most figure it was around 555, making it the longest winning streak in the history of sport.

“It wasn’t my plan to create such a record,” Khan once said. “All I did was put in the effort to win every match I played and it went on for weeks, months and years.”

Khan’s rival Ross Norman once admitted it got so deflating that everyone else just “accepted the inevitable”. The best strategy, Norman reckoned, was to wait. “One day Jahangir will be slightly off his game,” he told himself, “and I will get him.”

Next to Khan’s run, the England rugby team’s streak begins to look a little more modest. They have now won 18 games in a row, which means they’ve equalled the record set by New Zealand between the start of the 2015 World Cup and their defeat to Ireland in Chicago in November.

Even then you have to add a caveat because Cyprus, way down in the foothills of international rugby, once won 24 games in a row. Their run began with a 37-3 victory over Azerbaijan and ended, six years later, with a 30-19 defeat by Latvia.

World Rugby, who refused to let Cyprus try to qualify for the World Cup because of an obscure bylaw, sometimes give the impression that this record is a rather inconvenient truth. Which is all the more reason to mention it again here.

Still, 18 games is a hell of a run. Though England, of course, haven’t had to make that tricky trip away to Riga. Or played the world’s number one team, New Zealand. Infuriatingly, they are not due to face the All Blacks until the autumn of 2018. Since they have not yet met head-to-head, you have to set the two teams side by side.

On top of that, New Zealand played 10 of those 18 games away from home, though seven of them were at neutral venues during the 2015 World Cup, whereas England played 11 of their 18 games at Twickenham. New Zealand also won eight games against teams who were ranked in the world’s top four at the time, and in five of those games they demolished the opposition by at least 25 points.

England have won five games against teams ranked in the top four but never beaten any of them by such a wide margin. Add it all up, and you arrive at the answer most people would have come to without doing the work: New Zealand’s run was even better than England’s has been.

The most impressive thing about it is that England were eighth when Jones took charge. Their rise has come alongside their unbeaten run, achieved through the simple strategy of concentrating on nothing more complicated than winning the very next match. Just like Jahangir Khan, they were never planning to set a record.

And in fact, Jones is always quick to stress that the winning streak matters less than the trophies the team have won along the way, the series victory in Australia, back-to-back Six Nations Championships, and, perhaps, grand slams.

He has talked before about the New Zealand team that won 15 games straight between 2005 and 2006. Jones says that they played “some of the best rugby I’ve ever seen”. And then they lost to France in the quarter-finals of the 2007 World Cup. Likewise the South Africa side that won 17 games in 1997 and 1998, and then lost to Australia in the semi-finals in 1999. It is better to win seven World Cup matches once every four years than it is to win every other game you play in that time.

Wales stand-in coach Rob Howley reckoned it was one of the key reasons his side lost to them in Cardiff. “When you go unbeaten, as a player, you feel as though you can run through brick walls,” Howley said. “It’s a mentality.”

But it can also become a burden. As Khan explained: “The pressure began to mount as I kept winning every time and people were anxious to see if I could be beaten.”

And England have seemed at times to be weighed down by all the speculation about the record, and had been playing worse the closer that they got to equalling it.

Until Saturday, when, Jones said, they had “a shift in attitude” and decided to “embrace the challenge”.

They will have to do that again sometime soon, because they will lose eventually, if not to Ireland this Saturday, then perhaps to Argentina in the summer, when they will be without whichever players are selected for the Lions tour. And what will matter then is how they react when it happens.

For / Against / Tries / Average Points

1 Bryson DeChambeau trainer insists muscle gain is not down to steroids
2 Paul Stirling’s heart over head decision to play on for Ireland bears fruit
3 Sporting Cathedrals: Le Stadium - European fortress of the mighty Toulouse
4 Harding Park, named after a lousy US president who never stepped foot on it
5 Rory McIlroy hoping course-and-distance form will stand to him at Harding Park
Real news has value SUBSCRIBE