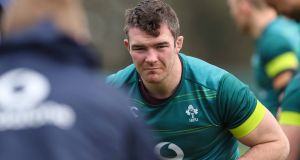 Ireland backrow Peter O’Mahony believes Ireland can beat England: “We need to figure out a way to just finish that last per cent”

In the aftermath of the defeat by Wales, it seemed that anywhere the stick landed was fair game.

The backrow . . . Thump. Robbie Henshaw barging into a rolling maul . . . Wallop. Rory Best opting for the touchline rather than three points . . . Crash. The lineout, once unimpeachable and now fractured or predictable or both . . . Smack.

Joe Schmidt even took a few lashes for not injecting the backline with flair, invention and promise. Then Ronan O’Gara singled out Best’s captaincy on television.

O’Gara’s experience as a player told him to kick everything. That was what was expected of him. His sangfroid and unerring accuracy determined strategy.

Because it won matches for Ireland and Munster, it is in his DNA as a sure-fire method of building a scoreboard and putting a full court press on the opposition not to foul.

Peter O’Mahony comes from the same Munster school and he may be one to benefit from the Welsh win. But O’Mahony still has skin in the game.

Best is where O’Gara’s stick landed. But to O’Mahony his captain is out of bounds.

“Look, Rory’s a quality player and captain. You’d follow Rory anywhere and any decision he makes,” said the Ireland backrow.

“You know there’s 14 fellas on the pitch who’d follow him and back him whatever he goes for. And it’s not just Rory, it’s input from a few guys on the team.”

“They’re decisions you make in the heat of the moment, and I thought they were the right decisions at the time and there was never a decision where I went ‘I would have gone the other way’.

“You’re going to back him every time with the quality he is, you know.”

Wholesale changes are not expected. While O’Mahony hopes the hamstring injury that initially kept him out of the squad is a distant memory, his frustration at the team’s missing one per cent that may have stopped them getting over the line is apparent.

Blame whoever you want, is his view, as Ireland seek to play more for pride and ranking than the negative concept of stopping England achieving a Grand Slam and world record.

O’Mahony feels the team’s search is close. The tournament is gone. But a win over England might at least satisfy themselves that they are not as impotent as people are figuring them out to be.

Jamie Heaslip anonymous in the match . . . ding. CJ Stander only a charging menace with no offload . . . clunk. There has been no shortage of stinging words.

“I was just making the comparison that four months ago we would be having a different conversation here,” says O’Mahony. “It’s not a completely different group or we haven’t changed the game plan in any way.

“We certainly took confidence out of it [November] into the Six Nations. But that’s a long way past now. We know how good we can be and how good we are.”

But O’Mahony can’t think like that. Hot-wired to “the process”, he looks forwards more than backwards. He also knows that the energy drop out in Cardiff will return by Friday in the bull market.

But this week some hurtful things have been spoken. Ireland is a team that can usefully take out big name favourites but don’t ask that they live up to king dog status. Maybe it is a mental issue . . . thwack.

“It is hard to say,” says O’Mahony, sounding in no way irked by the freighted question. “Look we are training really well. We do a lot of work on that [mental] side of it.

“I think in the white heat of battle it is a tough thing to get everything right. In international rugby these days if you get one or two things wrong you are probably talking seven to 14 points you have either missed or conceded.

It is very difficult to find a weakness in the England team, he says. Maro Itoje, he believes, has been one of the best in the world for the last 18 months, lock or flanker. But O’Mahony believes Ireland can win.

“It is just we need to figure out a way to just finish that last per cent,” he says. “To get back there.”

Dundalk fight back to earn a point but lose more ground 20:55
Caldwell’s 66 leaves him three off the lead at Celtic Classic 20:43
Bad light frustrates England as Pakistan hold out 19:31
Wilson holds nerve in tense last frame to reach Crucible final 19:23
Shane Lowry right in the mix at Wyndham after brilliant 63 17:48
Crossword Get access to over 6,000 interactive crosswords