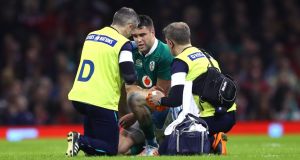 Ireland’s Conor Murray gets treatment on his shoulder during the defeat in Cardiff on Friday. Photograph: James Crombie/Inpho

Johnny Sexton and Conor Murray will be fit to play against England in Ireland’s final game of the Six Nations Championship in Dublin on Saturday.

Sexton passed his Head Injury Assessment (HIA) and was cleared of having been concussed against Wales while Murray suffered a stinger in his left shoulder.

The Irish scrumhalf was unable to run off the stinger during Friday evening’s match but Irish management expect that he will be fit to face England.

Tommy Bowe, who departed the pitch shortly after coming into the game in The Principality Stadium, has a suspected leg fracture and is due to see a specialist on Monday.

Bowe is replaced on the Irish squad by Leinster’s Fergus McFadden. Jared Payne, Luke Marshall and Craig Gilroy, who all played for Ulster at the weekend are also in the Irish squad.

“Conor was fine today,” said Irish team manager Paul Dean. “A stinger injury is peculiar. It’s a numbness that happens on the pitch. Iain Henderson had a bad one against France and recovered very, very quickly.

“With Conor, he’s such a very, very good player, we gave Conor as much opportunity as we could to recover from the stinger but as you all saw, he didn’t recover completely and we had to take him off but he’s fine.

“Johnny underwent a precautionary HIA at the weekend. Concussion has been ruled out and he is available for selection. Jonathan went through all of the concussion tests one, two and three and he’s okay. So he is completely clear

“Tommy Bowe has a suspected fracture of his left leg. He’s back in Ulster and will see a specialist today. Fergus McFadden is back in the squad and he replaces Tommy Bowe.”

Dean added that Payne is expected to train fully with the Irish squad, while Peter O’Mahony says he hopes to have caught the eye of Joe Schmidt for the final match of the series.

“I love playing for Ireland,” said O’Mahony. “Obviously everyone wants to start. It’s been a weird season so far for me with the amount of stuff that’s gone on for me.

“It’s the same as everyone, same as the lads who started the last day. Same as the lads who weren’t involved in the 23. Everyone’s here this week to put in a performance in training and prepare whoever’s starting as best we can to win at the weekend.”