Racing 92 and Stade Francais will merge next season

The two Parisian clubs both boast a strong history, tradition and potent resources 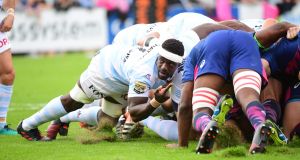 French giants Racing 92 and Stade Francais will merge next season.

Bosses at Racing 92 have confirmed the merger of the Top 14 pair, that both clubs expect to be ratified by league chiefs.

France’s Ligue Nationale de Rugby (LNR) is expected to rubber-stamp the move, with an extra place in next season’s division to be filled either via a play-off or offering another promotion spot from the second-tier ProD2.

“Winners of the first two championships in the history of French rugby in 1892 and 1893, Racing 92 and Stade Francais Paris also won the Bouclier de Brennus in the last two seasons,” Racing announced in a club statement.

“These two flagship clubs of Paris and the Hauts de Seine, beyond the sporting rivalry they have enjoyed, have many other similarities: a strong local and regional anchorage, a historic educational mission, ancestral ties with the Olympic movement and an inextinguishable will to progress in all areas.

“It is on the basis of these principles that the two clubs lay the foundations for a merger project by pooling their resources to better cope with the challenges of performance and education.

“This association, effective from next season, must give birth to a new club that will preserve the roots of Racing 92 and those of the Stade Francais Paris while multiplying the means put at the service of youth and French rugby.

“Consolidated by its dual culture, by the fierce determination of its two presidents and its increased audience in a population pool unmatched in France, this new club has a long-term commitment to build a true reference day after day.”