Six Nations 2017: Round four team of the week 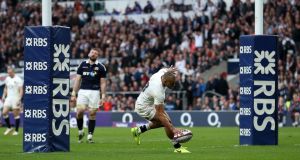 While it is doubtful his injury had a major impact on the final result it was a shame to see Stuart Hogg fail to make it back onto the pitch after a first half HIA at Twickenham. In his absence opposite number Brown rarely put a foot wrong in a tidy performance, and he leads the way in metres gained across the Championship.

After missing the England game through injury North struggled against Scotland but returned to his brilliant best against Ireland. He made a number of thumping carries - one of which left Rob Kearney on his backside during a particularly brutal passage of play - and scored the game’s two tries.

Left out of the side for the win over Italy Joseph returned with a bang against Scotland and was the hat-trick hero as England romped to the Championship title. Granted, he took advantage of some ragged Scottish defending, but his reading of the game, incisive running lines and lightning execution were a joy to watch.

Like Jonathan Joseph, Fickou took advantage of some fairly haphazard defending to run in his try against Italy, with his lovely show and go before a cruise to the touchline rounding off a 90-metre French break. He was a constant threat with the ball in hand and always looked likely to find a break on the outside shoulder.

He often still looks like a sevens player but he delivered a powerful performance against Italy and was heavily involved, crossing for the try in the second half which effectively ended things as a contest.

Farrell plays at inside centre but still seems to marshal things like a 10. His goal-kicking is probably the best in the Championship and he is immovable in defence. Eddie Jones’s general has helped the side to a second consecutive Six Nations title.

Much was made of Friday night’s battle of the scrumhalves, and with Conor Murray forced off with an injury early in the second half Webb won the duel by default. However up to that point Webb was the standout scrum half, and standout back, on the pitch. Warren Gatland has a very tricky decision to make as to who starts for the Lions. An honourable mention goes to France’s Baptiste Serin.

The Welsh scrum has hardly been a weapon so far in the Championship but it was better against Ireland with Evans anchoring it superbly. Evans contributions were not confined to the scrum however, with one brilliant miss pass in midfield which set off a Welsh attack highlighting his footballing ability.

Owens maintained his quite staggering 100 per cent lineout record against an Ireland side who usually pride themselves on their ability at set pieces. Added to his unerring throwing accuracy he was a dynamo in the loose and produced another industrious display.

Destroying the Italian scrum is a bit like shooting fish in a barrel but Slimani was particularly ruthless on Saturday and gave Andrea Lovotti a serious going over, a game after the Italian loosehead had destroyed Dan Cole at Twickenham.

One of the player’s of the tournament so far, Launchbury made a huge 22 tackles against Scotland in a game which his side won by 40 points. He helped drive Billy Vunipola over for his try and is another player who looks nailed on for the red of the Lions.

Lawes has forged a formidable partnership with Joe Launchbury and is one player who has been completely rejuvenated during England’s run under Eddie Jones. He isn’t as dynamic as the likes of Maro Itoje but was just as destructive against Scotland, making several powerful carries during the Twickenham rout.

The backrow battle was always likely to be key in Cardiff and while Ireland’s triumvirate of Stander-O’Brien-Heaslip didn’t perform badly they were simply outplayed. Warburton looks like he is somewhere near his best and he produced a brilliant defensive performance on Friday night, dominating on the deck. Maro Itoje narrowly misses out but was sublime again.

Tipuric is looking more and more a nailed on starter for the Lions and he was exceptional again against Ireland. Along with Warburton he was supreme on the deck and in the loose and matched his tenacity with a superb display of all round athleticism.

Eddie Jones resisted the temptation to introduce his biggest weapon until the second half and when Vunipola trotted on to make his return from injury an already buoyant Twickenham crowd seemed lifted. He scored in a solid 30 minute cameo and his comeback can only be a good thing for the Lions.