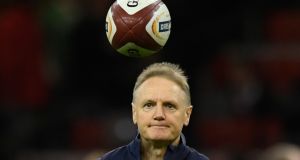 Last throw of the dice: Joe Schmidt believes Ireland have a “fantastic chance” of getting something out of the championship. Photograph: Stu Forster/Getty Images

Not even a title shoot-out, never mind a Grand Slam shoot-out. Instead, Ireland will have to regroup and host England in the 2017 Six Nations finale next Saturday evening but with redemption, pride and only second or third place to play for.

On the other hand, England, for the second season in a row, arrive as champions with a round to spare and seeking a Grand Slam after their 61-21 filleting of a previously fancied Scotland.

Any sporting collision between teams from Ireland and England could hardly be described as a dead rubber and certainly not a Six Nations game at a sold-out Aviva Stadium. But this is just not how it was meant to be.

Then again, that the Sweet Chariot will be arriving in Dublin in such inflated mode ought to motivate the home crowd and the home team to puncture England’s ambitions of a Grand Slam having already secured the title, as was the case at the old Lansdowne Road in 2001 and again in 2011. In addition, of course, England will be seeking to set a new record for a tier one nation of 19 wins in a row.

Ireland currently sit second in the table, but the three teams behind them, France, Wales and Scotland, are all within a point. Hence, Joe Schmidt’s side can finish anywhere between second and fifth, as can the other teams in the peloton.

There should be an update soon on the extent of the injury which seriously hampered Conor Murray during Friday night’s 22-9 defeat to Wales in Cardiff, forcing his withdrawal early in the second-half. Ice was applied to his left bicep and after the game Schmidt described the injury as, potentially, a “stinger”, although it was rumoured to be easing up on Saturday.

Alas, the desperately unlucky Tommy Bowe, Ireland’s second highest try scorer of all time, suffered a much more serious ankle injury (possibly a break) less than a minute after his 78th minute arrival at the Principality Stadium before being stretchered off.

This increased the chances of Jared Payne being recalled, at the very least into the match-day squad against England. He backed up an eight-minute outing at home to Treviso a week previously at outside centre by appearing in Ulster’s bonus point win at home to Zebre on Saturday.

Other changes to the starting line-up are more liable to come from within last Friday’s match-day squad, with Schmidt, Simon Easterby and co sure to consider the merits of restoring Peter O’Mahony to the backrow given his lineout abilities. That said, he is a blindside flanker, and CJ Stander was the pick of the Irish backrow against Wales.

“We’ll look at all the options,” said Schmidt at the Principality Stadium in the aftermath of Ireland’s defeat. “One thing for us is probably Paul O’Connell was probably the best lineout operator in world rugby. We’re asking a lot of Dev and Donnacha to make sure that we are trying to get access to the best ball that we can off the lineout.

“In the end they will have learnt a bit from tonight and they will continue to learn. Peter O’Mahony is a really good lineout operator and that’s always something that we factor in. When he did come on, I think we still lost one. A personnel change doesn’t necessarily solve a problem. It’s about accumulating some experience and learning from it.”

Schmidt will also have to deal with the sense of anticlimax which will have enveloped the squad over the weekend.

“Well, it is a test against England,” he said, while admitting “it is incredibly disappointing” that Ireland will not be competing for the title. “We will turn out and endeavour to do the very best we can to create opportunities, to get something off the back of them. We know how tough that is going to be. I think England are getting stronger as the tournament goes on.”

He cited the presence of both Vunipola brothers, Mako and Billy, Ben Te’o and Danny Care on the English bench, and the way England won games late on against France and Wales.

“That is how tough they are. You talk about how many games they have won in a row. That is how extended they are. That is the challenge for us. We are going to need 23 really fit guys.

“It is going to take at least 48 hours to see who has bounced back and who is really fit. We will see how they run on Monday and Tuesday to see what decisions we will make on Thursday.”

Bouncing back from Saturday’s disappointment would, Schmidt said, be difficult. “But I know that this group of players are incredibly good to work with, are incredibly resilient and I think they have demonstrated that before,” he said.

“They showed it during the game against Australia, and I think they have a fantastic chance this coming week to demonstrate that from week to week and get something out of the championship because I just think there are so many really good teams involved and if we can finish in the top half, I don’t think all is lost. So we have to chase that result.”

One of England’s survivors from 2011 is the aforementioned Care, and the English scrumhalf said of playing Ireland at the Aviva: “It’s as big a Test match as you’ll play in. A lot of the boys have been down there, so there is some experience. Probably a couple haven’t and it’s great to have that balance. The start will be key down there and we want a full 80-minute performance. Hopefully we’ll get another win.

“Any team wants to start the game well and in times past Ireland have probably shocked us a bit with their intensity. That is something we want to do to teams, try and take them to a different level and hopefully we can do that.”