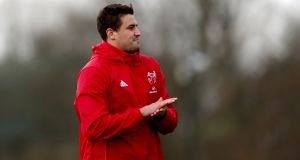 Despite previously stating that the IRFU had a “zero tolerance” attitude towards players who had been guilty of using performance enhancing drugs, the Union’s CEO Philip Browne today maintained that anybody who makes a mistake deserves a second chance. That said, he also admitted the Union would have to reconsider their position when it comes to future signings.

Browne was speaking at the announcement confirming the extension of the naming rights of the Aviva Stadium until 2015, before the topic of Gerbrandt Grobler’s signing by Munster was invariably brought up. The South African lock received a two-year ban after testing positive for the anabolic steroid drostanolone which was effective until October 2016, after which he joined Racing 92 before Munster signed him on a one-year deal for this season.

“The situation with Grobler is that there was knowledge of his background, yes,” Browne told reporters this morning. “The IRFU and Munster operate together in terms of bringing in foreign players. With Grobler, he was a young man in a very different rugby environment and he made a poor decision. He’s been punished for that poor decision.

“Having said that, everyone deserves a chance. Can any of you look at yourselves and say ‘I’ve never made a poor decision in my life before?’ Probably not. We’re all guilty of making poor decisions. I think 20/20 vision, when you look at it, would we consider how we would deal with a similar situation in the future? The answer is yes.

Asked if another “convicted doper” could be brought in to Irish rugby, or if it would be a stated policy or would it be on a case-by-case basis, Browne evidently objected to the tone of the question.

“Well that’s a nonsense question,” he said. “The reality is that we will obviously consider our policies, we will consider how we deal with a similar set of circumstances in the future.

“The fact of the matter is our real focus is on developing Irish talent and it always has been, and yes there are times in the cycle when we have difficulties in actually getting players in certain positions and at times we have to look overseas to get those players, and then there’s the cachet player, where we bring a cachet player in who adds value to a provincial squad.

“So we are going to continue to have players coming in from overseas because the reality is, in the short to medium term, we are never going to be able to fill all our teams. And don’t forget we have four teams with a small playing base and our aim and ambition has always been to have at least three players in every position, 1 to 15 across the provinces who are Irish-born and capable of playing for Ireland.

“Now that is our ambition because we have to deliver for our national coach, so that he has the options available to him in terms of selection and I think we’re doing a reasonable job of that. Yes, I think there are probably difficulties in terms of bringing players through in Munster and indeed in Ulster and Connacht. But that’s a numbers game. It’s partly a numbers game, partly due to the traditional strength of schools rugby particularly in Leinster,” added Browne, highlighting that 48 per cent of the population live in the province, and that the Union would continue to pinpoint overseas’ players for a variety of reasons.

“I foresee that continuing. In terms of: ‘are we going to bring in drug cheats’ the answer is: I don’t think we are. But in this circumstance there’s a young man, who made a poor decision in an environment which is very different to the environment he’s operating in now. And at this stage, he’s had a pretty torrid time for the last week or 10 days.”

Referring specifically to the IRFU sanctioning the signing of Grobler, which was actually last July, Browne said: “The first thing I’ll say about it is that the Irish rugby environment is probably one of the most stringent environments in terms of drug testing worldwide. It has always been that case. We’ve worked really closely with Sport Ireland and over 70 per cent of the user pay tests that are carried out by Sport Ireland are actually for rugby.

“We have a targeted programme, we particularly target players coming up through the system so all of our provincial academy squads are targeted so we are confident that we have a really good regime in place in terms of anti-doping in Ireland.

“Furthermore, we’ve made an investment over the years in terms of education. We now have five people involved full-time in the ‘Spirit’ programme and four - one in each of the provinces and then Ann-Marie Hughes who co-ordinates.

“A large part of that programme is actually around supplements and anti-doping, working at schools’ level, club level and obviously our professional teams are served by nutritionists and by qualified medical practitioners.

“There’s no question that our players are fully aware of what’s required of them, they are fully aware of the dangers and the risks to their career in relation to abuse of banned substances. I think it’s very important that that is put out there, that that is understood. Not all of you may have read our annual report in relation to anti-doping and the evidence is all in there.”

“The proof is in the eating of that particular pudding in that we have a pretty good record in terms of cleared testing and a lack of positives over the years.”

“We have a strong policy in relation to things. Do we need to consider what we’d do in a similar set of circumstances should they arise in future, the answer is: yes, we should probably consider that.”