Munster will have regrets despite earning bonus point 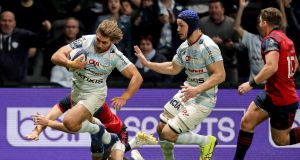 The Rolling Stones having been the first band to play in the U Arena last October, so Munster became the first away side to play in Racing’s new, futuristic home in the European Champions Cup yesterday. And so, while you can’t always get what you want, but if you try sometimes – and hang in there when everything seems to be conspiring against you – you’ll find you get what you need.

They still have to beat Castres, whose 39-0 bonus-point win over Leicester keeps them in contention four points adrift of Munster, in Thomond Park.

Munster will have regrets aplenty, having had more than enough of the game and chances to beat Racing, and so emulate Leinster in reaching the quarter-finals with a game to spare. But the losing bonus point from a slightly madcap 34-30 defeat at least keeps them atop Pool 4 by a point from Racing.

A victory of any kind against Castres next Saturday will nail down first place, for even if Racing beat Leicester with a bonus point for both teams to finish on 20 points with five match points apiece in their two encounters, Munster would lead the head to head by dint of scoring five tries to four in the two meetings. This made Racing’s decision to take another penalty two minutes from time rather than go for the bonus-point try, which would have put them above Munster in the table and the head-to-head, all the more curious.

Asked if he was relieved when Racing opted for a shot at goal, Johann van Graan admitted with a smile: “Yes, very much so. Our initial reaction was if they go for a scrum that’s the hardest scrum to defend and they mauled pretty well with their massive players. So I was very relieved about that.

“As a squad, we’re all disappointed about this one. It was a very different occasion to what Munster’s used to and to have been in front with two minutes to go and let this one get away is disappointing but I’m going to take the positive out of it and I’m very glad about that bonus point.”

Located in the vast swathe of nouveau glass buildings in the financial district of Nanterre in west Paris, to be honest the enclosed, all-seated stadium feels more like a concert venue dressed up as a rugby ground than vice versa.

The giant screen, relaying up-to-date match stats, was the length of the in-goal area, flanked by two relative modest screens which showed replays. Coupled with the pre-match darkness and the bright lights for the arrival of the players, it assuredly wasn’t what William Webb Ellis had in mind. The empty upper tier was darkened out, where those of us in the press tribune were given spotlights to illuminate our laptops.

From Munster’s perspective, it should have been better, but it could have been worse. Ever the Drama Kings, they naturally had to take it to the last day. Van Graan is happily aboard.

“It’s the first time that I’m part of this competition. I just watched the game last night between Saracens and Ospreys, it was a similar type of game but totally different conditions. I said to the lads in there, it just shows what an amazing competition this is.

“Over six rounds, I’ll take it back to when I wasn’t even at Munster, and that draw against Castres away when they had one or two opportunities to kick at goal and then the 14-7 win at Thomond Park and the wins at home and away against Leicester – it’s just an unbelievable competition.

“That’s what we love and want to embrace. The players want to play in big games and this is a big game at home. We can’t wait.”

Following on from Exeter’s second-half mauling of Montpellier on Saturday, Leinster duly sealed their place in the last eight and ensured a home quarter-final with a handsome 55-19, eight-try win over Glasgow at the RDS. They had their bonus point accrued in the 35th minute through Scott Fardy’s try and can now seal first seeding in the last eight merely with a bonus point in Montpellier next Saturday.

That would mean a quarter-final against the third best runner-up, which could be back-to-back champions Saracens, although after their 15-all draw away to the Ospreys, even with a bonus-point win at home to Northampton which would take them to 18 points, Saracens could still miss out.

Financial imperatives decree that Leinster would probably move their quarter-final to the Aviva. “We’ll see,” said Cullen. “Generally, the discussion has been that it goes to the Aviva. There will be discussions. Based off recent history, it’s leaning more towards it.”

Going into the weekend, Ulster would certainly have settled for the position they find themselves in entering the final round of matches. Following on from their gritty 20-13 win over La Rochelle, when Wasps then led Harlequins by 28-12 with 17 minutes to go at the Stoop on Saturday night, it looked for all the world as if they would close to within two points of Ulster pending the sides’ meeting at the Ricoh Arena next Sunday. Cue the sting in the tale.

Three late tries by Quins, the last by James Chisholm in the 80th minute, completed a remarkable turnaround and a 33-28 win for the home side which left Wasps all but eliminated. Ulster will most probably still need another win in Coventry to ensure their place in the last eight, but at least they know a victory will achieve as much, even if in that scenario. La Rochelle would finish above them with a bonus-point win over Harlequins due to their better head-to-head record.

Were they to win with a bonus point though, Ulster would top the pool which could earn them a home quarter-final. Helpfully, Pool 1 kicks off last and so Ulster will know the final standings in all the other groups.

Connacht’s recovery at Worcester from 24-14 down at half-time, having ended the first half and started the second with 13 men, ensured they qualified for the knock-out stages. A win against Oyonnax next Saturday afternoon at the Sportsground will secure a home quarter-final.