Scarlets’ chances against Bath dented after loss of Halfpenny and McNicholl 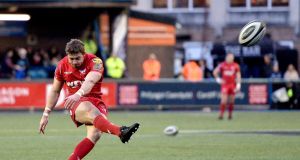 Scarlets’ Leigh Halfpenny: along with Johnny McNicholl he pulled up lame during the captain’s run. Photograph: Ian Cook/Inpho

Scarlets’ chances took a significant nosedive after the late withdrawal of Leigh Halfpenny and Johnny McNicholl, both of whom were originally named in the team for this pivotal European Champions Cup fixture. The Welsh side are already without key players such as Jonathan Davies and Jake Ball and could have done without this latest setback and the reshuffle it necessitated.

Scarlets’ coach Wayne Pivac described this fixture as akin to a cup final primarily because the loser will be shunted to the periphery of the playoff scramble. Despite escaping from Italy with a fortuitous last minute win, Toulon should pick up a four try, bonus point win at home to Treviso this weekend, putting them in the box seat going into the final round of matches.

The Welsh side need to get something from this match as they trail their two rivals by a point and have the toughest set of fixtures as they face Toulon at Parc y Scarlets while Bath travel to Treviso in round six of the tournament. They could ill afford such a blow ahead of the match.

When the Scarlets and Bath met earlier in the competition it was the English side that escaped from west Wales with the victory, something they’ll be keen to repeat. Interestingly this will be the third meeting of these teams in Europe with the away side triumphing on the two previous occasions.

Tadhg Beirne reverts to the secondrow for the Scarlets having divided his time between there and blindside flanker this season. Despite winning 11 of 13 matches in the Pro14, Pivac admitted that the Scarlets spent some time over the Christmas period focusing on the basics that he contended hadn’t been as sharp in recent matches.

‘Attacking game’
He said: “This week is about trying to get our attacking game going again. We just have to look back to when we played them last time. They were more disciplined and more clinical than we were and played the conditions better than we did.

The Scarlets’ misfortune in personnel terms make Bath even stronger favourites than the three points the bookmakers offered before the news broke. In that context anything other than a win for the home side would be a surprise.

1 Gerry Thornley: Saracens very late to apologise for repeated cheating
2 As the UK tightens gambling laws Ireland still lags way behind
3 Champions Cup final: How to get there, how to get tickets and more
4 Felix Jones expects De Allende and Snyman to boost Munster
5 Sam Bennett grabs first win of the season at Santos Tour Down Under
Real news has value SUBSCRIBE