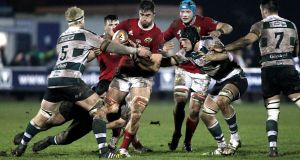 Johann van Graan has condemned ‘doping’ in rugby while maintaining that as head coach at Munster he is obliged to treat Gerbrandt Grobler, who has served a two-year ban for using performance enhancing drugs, the same as all the players in his squad.

In February 2015, it was revealed that Grobler received a two-year ban after testing positive for the anabolic steroid drostanolone following a match in the 2014 Currie Cup Premier Division. Grobler admitted his guilt and received a two-year ban, effective until October 2016, after which he joined Racing 92 before Munster signed him on a one-year deal for this season.

Although little was made of Munster signing Grobler early last July, when Van Graan was asked about the South African lock on foot of his return to fitness after overcoming an injury in pre-season to play for the Munster ‘A’ side last weekend, it prompted an outcry.

Asked if he could understand the debate and widespread unease about signing a player who had been banned for using performance enhancing drugs, Van Graan admitted: “I can understand it. Doping is wrong. You can never say anything good about it.”

He added: “In GG’s case, he had a two-year ban from World Rugby. He served his ban, went to another club, Munster signed him. I came in eight weeks ago. I am treating GG and all other players, all management except JP Ferreira because JP came in a bit later. I am the coach of Munster at this stage. I am not going to comment on any process. I said what I wanted to say last week. It’s my responsibility to take care of all of the people at Munster at this stage and that I can do it well.”

“As far as I’m concerned, Munster signed him, he’d played 20 games or whatever for Racing then we signed him obviously on good terms, good references that we got, as we do for all our signings and he’s come here, he’s struggled with injury and he’s been a great guy to have around the place.

“He’s working very diligently on his rehab and he’s struggled a little bit mentally at times with that, because he obviously wants to come and play, which is what every rugby players wants to do.

“As far as me and the other players are concerned, he’s been great for us and we’ll certainly stand by him. As far as we’re concerned he’s done his time and that’s the end of it.”

Looking ahead to Munster’s potentially season-defining European Champions Cup finale against Castres at Thomond Park (kick-off 1pm) when they must win to qualify for the knock-out stages, Van Graan said yesterday morning’s review highlighted how they created opportunities, but that they also needed to be more clinical in taking them, and admitted: “I thought we as team could have handled those last few moments better.”

Munster’s draw in round one against Castres doesn’t look too shabby now, given the French outfit have won six consecutive games at home since then, culminating in last Sunday’s 39-0 win over Leicester, and have risen to fourth in the Top 14 after a run of seven consecutive wins before the defeat to Agen a fortnight ago.

Castres have threats “all over the park” according to Van Graan. “You just need to look where they are in the French Top 14, how they played against Leicester and the previous game against Munster. They have big forwards, a very good kicking game with a left-footed flyhalf (Argentinian Benjamin Urdapilleta).

“They do have a long kicking game. They put you under pressure with a good chase; a very good maul, we need to stop their maul. Defensively you just had to look at the Leicester game, and the way they defended, so that’s top quality side that we are playing against.”

As well as having a seven-day turnaround, it’s perhaps also helpful that three pools will be completed on Saturday, which could leave Munster with a clearer picture as to whether a home quarter-final is in their reach or not. But either way, Munster have to win to stay alive and so Van Graan will not be sitting in front of his TV through Saturday afternoon and into the evening.

“I’m going to watch nothing else, just focus on our game. It’s pretty important that we get a win on Sunday. We are in control of our own destiny. We need a win, we need to play well. It will be a high pressure environment two teams that can still qualify. We need to play well, prepare well and have a good 80 minutes. Not focus on the win too much; focus on the process throughout the week.”