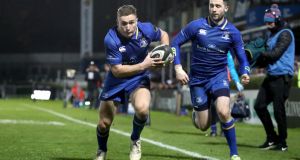 Jordan Larmour and Girvan Dempsey came to the same conclusion independently, that the fullback role represents the ideal platform from which to launch the former St Andrew’s College schoolboy’s exuberant attacking skills.

The 20-year-old Larmour said in an interview with Rugby World last December that “at the moment I really enjoy fullback because you get a bit more space on the ball and can counterattack.”

Dempsey, Leinster’s backs coach and someone who works with the precociously gifted underage international on a daily basis, reached the same conclusion. Speaking at a media gig ahead of Saturday’s Champions Cup trip to Montpellier he explained: “I think fullback, he’s very exciting from there. He can play fullback, right wing and centre but the more space he has the more damage he can do.”

Larmour is expected to be named in Joe Schmidt’s extended Ireland squad ahead of the opening two matches against France and Italy in the Six Nations Championship, having twice trained with them before as an “extra”, when part of the Leinster academy. He’ll be there this time as a bona fide squad member this time.

Dempsey, who won 82 caps and scored 19 tries at fullback during his Ireland career, has facilitated Larmour’s rapid development, something the latter has acknowledged: “Girvan Dempsey has been really helpful and, as he played fullback, I can talk to him about different things.”

Aside from his attacking brio, Larmour’s positional play and reading of the game in defence is mature beyond his years; it was one of the outstanding qualities possessed by his coach.

Dempsey understands the hoopla and excitement surrounding his charge but was keen to stress that the dash with which Larmour plays is underpinned by dedicated application to his preparation. “He is the last one to leave the field and he bounds out onto the field. He works so hard on the game, does a huge amount of work on his ball skills.

“He goes through video work with us on his positional play. His ball-in-hand skills are excellent. The speed and accuracy of his passing is excellent. He is constantly learning. He has shown that he’s not fazed by big occasions, which has been a real asset. Sometimes you get a young player who is on the scene and he’s got that exuberance but he’s daunted by the occasion.

“But, Jordan hasn’t been fazed and he’s got a really good grounding. Whether he is selected for higher honours, it is ultimately up to the other coaches to decide that. We’re just pleased with how much he’s progressing, how much he’s learned over the last while and how eager he is to improve even more.

“If he continues to improve the way he’s improving, yeah, it’s ultimately up to the national coaches, the make-up of their squad. He’s certainly putting his hand up for selection which is all you can ask.”

And compiling a pretty persuasive argument too, purely based on his capacity to graduate through the levels with no diminution in the quality of his input.