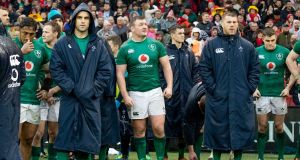 And so former Irish coach Warren Gatland becomes the first coach ever to win three Grand Slams. This is St Patrick’s Weekend. We own it, right?

The BBC’s Gabby Logan didn’t get the message to go easy so close to our national holiday. Where were Ireland today, she asked a shrunken Irish captain Rory Best before prodding him with a pointy stick a second time. What’s happened to Ireland in the last couple of months?

The Irish hooker grimaced and spoke about striving to get better. A broken team can’t just be reduced to a sound bite, even if you know the answer.

Everyone had questions, like what is a retractable roof for when it’s wide open in the rain? In Ireland we love a bit of wet weather rugby. And boy did we get it on a day of anomalies, paradoxes and departures.

“We usually play in those conditions pretty well,” Irish coach Joe Schmidt told Sinead Kissane on Virgin One, the flip side of that being not this time. A departure.

The weather huh. It started badly and got worse. Then it deteriorated and became terrible before Jonathan Davies on BBC called it disgraceful.

“I wonder will they question the decision to leave the roof open?” mused Jamie Heaslip to Davies and Eddie Butler. Yes, he read your mind too. On Virgin One Alan ‘Quinny’ Quinlan was having eerily similar thoughts.

“That wet ball hasn’t helped Ireland at all. In fact it’s had the opposite effect,” he observed as Irish fullback Rob Kearney aquaplaned a full 20 feet on his back, taking out Welsh centre Hadleigh Parkes like a bowling pin. The roof was turning into a topic of conversation.

But the conversation Matt Williams sought was of a national variety. He wanted a State of the Union address on Ireland’s World Cup readiness. He called for a Robert Mueller Report on form, sought a Select Committee investigation on performance and demanded a top priority probe into Ireland scaring the bejaysus out of the country on Paddy’s weekend.

The studio analysts to his side, former international players Shane Horgan and Shane Jennings, were wearing pall bearer expressions. Both would have played alongside Rory Best.

Horgan’s precision was again on show. On that first try, the one scored by Parkes after one minute and nine seconds, which triggered the Irish downward spiral, Horgan pointed to where Murray was positioned out on the left fringe of the defensive line. Then he pointed to the big hole where he coulda, shoulda been.

“If it’s a policy not to be there, it’s incorrect,” said Horgan. Case closed.

From that moment the match, like the rain and occasionally the ball drained away from Ireland’s grasp. After eight first half penalties conceded and 16-0 down, Quinny could sense Wales were truly wrecking the Irish buzz. He became paradoxical.

“It’s looking impossible for Ireland to come back and win this,” he said. “It’s not beyond them.” Even Joe isn’t that good.

But the former flanker was correct and late in the second half the camera cut to the forlorn figure of Schmidt silhouetted and leaning against a door jam up in the stadium.

If they had decided to freeze that image and launch a national competition for people to guess what Joe is thinking, it might have been something like ‘s**t and I’ve six months left on my contract.’

It also might have been ‘can I build a World Cup campaign around an 83rd minute Jordan Larmour try?’ There could have been a big bagel beside Ireland’s name. But there wasn’t. Was that try the moment of resurrection or simply crossing the t of insufficient.

Oddly World Cup winning England captain, Martin Johnson, on BBC was not as unbelievably depressed about it all as the rest of the green tinted world.

A career full of more highs than lows, the former lock has had to suck up crazy stuff along the way. He advocated a simple solution when asked to put himself in the position of an Irish player, which of course he had direct experience of doing.

In 2003 President of Ireland Mary McAleese had to walk on the grass rather than the red carpet because England had annexed the Irish team’s pre-match position and Johnson refused to move.

“Go back to doing what we do and good things happen,” said Jonno. Magic. Shortly after that Schmidt was bringing more calm.

“I still have confidence we’ll bounce back,” said the measured Irish coach. “We’ll be competitive.”

To be sure, to be sure. And anyway there is always Katie Taylor.