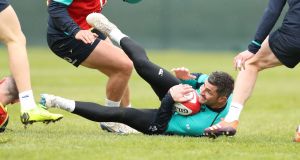 Cardiff knows how to throw a party at the best of times and all the more so if it is to coronate a cherished Grand Slam, as any Irish person who was in the vicinity in 2005 can testify. Once again, Ireland have been placed in the role of party poopers come kick-off at 2.45pm in the Principality Stadium tomorrow.

After restoring Rob Kearney and Seán O’Brien, while promoting Tadhg Beirne for his Six Nations debut in a move which is sure to heighten the breakdown battle, Joe Schmidt also recalled Ireland’s Slam last year at Twickenham in admitting Wales have everything to play for.

“And it (the Grand Slam) does add a little ounce of energy and of real focus to what you’re doing because they’re rare, and what’s rare is a beautiful thing. Even more rare for us, because we’ve only had three of them.

“But even for the Welsh, they haven’t won a championship for a few years, and they’ve put themselves in this position, they will be absolutely motivated to finish it off.”

Schmidt, who has also restored Andrew Porter, Quinn Roux and Kieran Marmion to the match-day 23, admitted that replicating that focus and energy cannot be manufactured in the Irish players.

“You never manufacture anything. It’s organic, it’s what they want to deliver and they’re driven as well. They’ll definitely want to deliver a really positive performance. They want to finish the way they would have liked to have started, with the right amount of energy, with the right amount of focus that we can put Wales under pressure sufficiently well that we can get those fine margins to fall our way and get the result that we need.”

There’s no doubt that Wales tend not to falter when the grand prize is on the line, all the more so when the last leg is at home.

“We don’t very often, no,” said Warren Gatland after naming an unchanged side. “I pride myself on the record I’ve had in big matches when it’s really mattered. I even get more of a buzz when people write us off which has happened on a number of occasions before. It’s about building belief and confidence in the players.

“We’ve worked in the down weeks and we’ve trained as hard as any team I’ve seen,” he said, adding: “Often with teams you get one which wants it just that little bit more and that’s the position we’ve been in, in the past. If you want something bad enough and you really believe it can happen, then it often does.”

That hoary old chestnut about whether the roof will be closed or not has again reared its head. Two years ago, Ireland agreed to it being closed but were annoyed that the pitch was heavily watered before kick-off. This time, Schmidt said Wales had appealed directly to the Six Nations, complete with a foreboding weather forecast, for it to be closed.

“For us, the last time it was closed we arrived there and there was a lot said about making it good for spectators. And then the sprinklers were on for 30 minutes and the ground was very, very damp before the game started.

However, for his part, Gatland said: “We have not heard definitively but we understand they want it open which is not a concern for us. My only concern is that if it is pouring down with rain then we do have a responsibility to the game for a spectacle. There may be nine million people watching it on TV but I don’t see the point, having the opportunity to close the roof, to potentially play in terrible weather conditions.”

“It’s our stadium and we should be able to do what we want with it,” he added, while also admitting that putting pressure on Conor Murray and Johnny Sexton will be a key component of the Welsh game plan.

The Irish camp are awaiting a response from the Six Nations, with a definitive decision to be made today.

This game will be Gatland’s 50th and last Six Nations game as Wales’ head coach, and Schmidt’s 30th and last with Ireland. At times, the impression has been that the two Kiwis are not especially close. Noting how they’d played against each other in Manawatu-Waikato games, Schmidt added: “I’ve played with him in a schools selection. I’ve played a fair bit (for Manawatu) with his brother-in-law Clifton Shaw, Trudi’s brother.

“So I’ve gotten to know him over the years and we’d have a pretty friendly relationship. He would probably engage in a bit more pre-match banter than I would and again that’s his domain. He’s been at this level twice as long as I have, in fact longer than that. I think you earn that opportunity.”

Approaching his final championship game, Schmidt said: “The championship is incredibly special. It is intense, incredibly intense and you come up against players that you know well,” he said. “That almost sibling rivalry escalates the intensity just that much more. And so, as I said before this Six Nations, if we can get into the top two teams in the Six Nations, I think anyone who does that is doing a good job.”