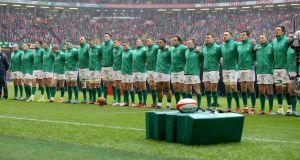 The Ireland team stand for the national anthems before the game. Photo: Bryan Keane/Inpho

15 Rob Kearney – The fullback is responsible for kicks over the defensive line and while Gareth Anscombe’s chip after 61 seconds was pure, Hadleigh Parkes beat Kearney to the ball. Ireland never recovered. Rating: 5

14 Keith Earls – Showed genuine heart, as ever. The ball didn’t come his way and he was probably blessed by George North’s early departure but in the rain wingers rarely shine. Rating: 5

13 Garry Ringrose – Another largely irrelevant figure – see nine carries for six metres – which says a lot considering how important he has become in recent victories over New Zealand, England and France. Couldn’t find a way into this game and out played by Jonathan Davies. Rating: 5

12 Bundee Aki – Made the most tackles for any back but seven hits is hardly anything to write home to Galway about. Eight carries for eight metres, again better than some, shows the Irish midfield was ruthlessly shut down by Wales. Ireland still need Robbie Henshaw. Rating: 5

11 Jacob Stockdale – Stretched his legs but the deadly finisher was chased down by Hadleigh Parkes for what seemed a certain try that Ireland desperately needed. Beaten in the air. Bustled into touch. Rating: 5

10 Johnny Sexton – Worst day in a green jersey? Some of his restarts were substandard, some of them bobbled along the ground and when he flung the ball into touch on 56 minutes the Welsh crowd exploded (in laughter) as Ireland’s hope of revival evaporated. Rating: 3

9 Conor Murray – Ireland coach Joe Schmidt was adamant that Murray and Sexton are not the reason Ireland got hammered but we are not seeing the same player everyone rightly labelled the best scrumhalf on the planet in 2018. Rating: 4

1 Cian Healy – Done for a costly scrum penalty on the stroke of half-time that left Ireland with a 16-point mountain, which in the conditions seemed impossible to climb. His arm touched the ground but it seemed a harsh call. Rating: 5

2 Rory Best – Terrible ending to a truly great Six Nations career. Best remains the starting hooker, he remains the Ireland captain and physically he seems capable of soldiering until the World Cup in Japan but his lineout throwing has become a real threat to Irish progress. Rating: 3

3 Tadhg Furlong – Worst game in a green jersey. The best tighthead in Europe he remains, but coughed up a scrum penalty and was caught offside to gift Anscombe a valuable three points. Anonymous when needed. Rating: 4

4 Tadhg Beirne – Thrilling start on his Six Nations debut with the cleanest possible turnover on 12 minutes to deny Wales what looked a certain second try. Not much else to report besides three carries for zero yards and five tackles. Rating: 5

5 James Ryan – Much of the lineout malfunctioning while, off his calling, were Best throws to other jumpers. Still, he will carry some responsibility. 13 carries into Welsh heavyweights for 19 metres was impressive on this soggy pitch. Also made some thunderous tackles. Rating: 6

6 Peter O’Mahony – Statistically his performance fell off a cliff: Two carries for two metres and two tackles. Two. For a flanker that is beyond poor. Removed from the equation by Welsh backrow. Rating: 4

7 Seán O’Brien – You could hear him, pleading with the referee for a break, and he showed well in the initial exchanges, he seemed primed for one of those epic performances but it petered out and Schmidt replaced him worryingly early (worryingly for his World Cup prospects). Hopefully not the last we see of this great flanker in the green jersey of Ireland. Rating: 4

8 CJ Stander – Typically impressive numbers: 16 carries (granted, only for 11 metres) beating two defenders in the process. If anyone is allowed a mistake it is the big Munster number eight but that quick tap on 27 minutes saw Ireland lose absolutely crucial possession in a points scoring position. It proved vital as visits to the Welsh 22 were rare. Rating: 4

Bench – The game was long gone when the bench arrived. They were unable to turn the tide. Andrew Porter gave up another easy three points for Anscombe. Rating: 3

Coach – Turns out there was a bug in Ireland camp this week but Joe Schmidt is the man responsible for tactics. He demanded the stadium roof remained open and the constant rain meant Ireland could not get a foothold. The rain meant they could not build phases. He asked the public to keep the faith. He’s earned as much wriggle room as he needs to fix mounting problems. Rating: 4