Joe Schmidt: ‘The team will definitely turn up in Japan’ 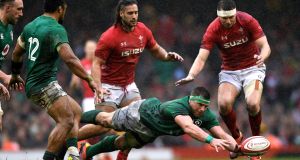 Ireland’s CJ Stander tries to claim possession of the ball during the Six Nations match against Wales in Cardiff. Photograph: Alex Davidson/Inpho

Ireland may not have become a bad team overnight, but it’s fair to say that over the last two months they have stopped being a very good one. The final table will see them finish third, and having been well beaten at home by England and then thumped here in Wales, that is where they deserve to be.

This defeat was nothing like on that scale, but yet, somewhat surprisingly, afterwards Schmidt bucked the prevailing view when maintaining it was not as disappointing a performance as the opening defeat to England which so de-railed Ireland’s campaign.

“It’s probably not as disappointing as the one that we started the competition with, to be honest. I felt that that game, while the score got away from us, I don’t think that performance-wise, we were as far off the mark as we were at the start of the championship.

“Talking to Gats even before the game and then after the game, he was talking about that extra 5 per cent you get when you’re going for a Grand Slam, that really difficult task you’re trying to achieve. We benefited from that last year in Twickenham.

“The energy that is gives you, the belief that you get from having accumulated those four wins and the desperation to make sure you deliver another one. The way the game started, immediately added to that belief.

“We then had to try to force our way back into the game. I thought we were a bit unlucky sometimes with some of the calls, but at the same time, I thought they defended well and our discipline wasn’t quite what we needed it to be.”

The Irish head coach sought to keep a lid on the reaction to the defeat and urged Irish supporters to keep faith in the team. Asked if descriptions of this Irish defeat being a horror show were an over-reaction, Schmidt said: “I guess you guys will set the narrative really. We can only perform in those two 40-minute windows that we get and then the narrative will be whatever pundits or journalists put out there.

“For us, we would certainly encourage the genuine supporter not to lose faith in the team. The team will definitely turn up in Japan and we’ll grow a bit from this. You only have to look back a year and see that England went back-to-back in the championship and ended up fifth.

“We’ve fought our way up to third, we’re in the top half of the championship. We haven’t been catastrophic but we haven’t been as good as we needed to be. Today was probably an example of that.

“At the same time, I’d like to take my hat off to Wales and to Gats. To be 12 years as an international head coach, I’ve done six and it’s damn near killed me. I don’t know how Gats has managed 12 and to be as competitive as they have been.

“Ironically, we were 16-0 down at half-time and so were they against France. They maybe got a helping hand a couple of times in that match to get back into it but they got back into it and they know how to fight their way to the finish.

“We’ve won 23 of our last 26 Test matches. We’ve finished third in the Six Nations. Once upon a time that wasn’t the catastrophe that it is today for Ireland. The fact that we’ve won three of the previous five, makes it less than it should be. We’ll be the first to put our hands up and say that’s not as good as we want to be, the first to take our hats off and acknowledge Wales’ performance, then reflect, go forward and rebuild and I’d like to think that the genuine supporter will be 100 per cent behind us.”

Ironically, Ireland’s decision to keep the roof open played into Welsh hands. While conditions were a factor, for all Ireland’s possession and territory, they manufactured only one line break and were, for the most part, made look relatively blunt by the admittedly brilliant Welsh defence. The suspicion again lurked that Ireland have been worked out.

“I’m not sure,” said Schmidt. “I’m sure that teams will on their day, sometimes they get the better of you and sometimes not. It’s such a fine margin. Yeah, I think Wales today in the conditions, they got the benefit of some set piece decisions and on the back for that they maintained the pressure that they got off that first try.

“In the conditions today, we actually said they would do exactly what they did in those first two minutes, so even sometimes if you know what a team’s going to do, it’s another thing to stop them and we felt that England would do what they did as well.

“It was difficult to stop them. England knew what we were going to do in Twickenham last year but we were difficult to stop. On any given day, that’s the very highest level of Test rugby, where the margins are fine on any given day. When you get the momentum at the start of the game it is hard to then swing the momentum back in your favour and that’s a challenge for any team.”

For such an experienced team, and for whom discipline and composure have been such a benchmark of their displays in big occasions such as this, it was surprising to see them become so ragged and evidently frustrated, not least with referee Angus Gardner.

No-one betrayed these signs more than Johnny Sexton, but Schmidt maintained: “I think the captain was trying to have the same discourse with the referee, to be honest, from what we could hear. I think there was frustration out there and I think when we review the game, we’ll have those frustrations. I do think he’s been really positive through the week and he’s building his way forward.”

Wales were 22-0 ahead by the 55th minute, but despite the game long since being up Kieran Marmion and Jack Carty were not brought on for Conor Murray and Sexton until the 70th and 73rd minutes.

Explaining this, Schmidt said: “Again, we’re trying to build those two guys forward. It’s important to invest in people and that was part of the remit we decided to prioritise in this Six Nations and whether it bears fruit at the other end of this season we’ll see.

“As I said, I don’t get into prognosis. All I do is try to get into preparation. The best preparation for top-class players is to be in pressure-cooker situations and to work their way through them.

“If every time that isn’t going well you take them off, I don’t think you’re growing them back to where they need to be. They’ve had so many days in the team where they’ve been the hub on which the wheel has turned and the wheel has generally gone forward.”

Reflecting on his Six Nations farewell, Rory Best admitted it was an incredibly disappointing.

“Your last Six Nations game, you want it to be a fairytale. You wanted to win and to win in such a place as this would have been a massive statement for the team but it would have taken a massive performance, which is what you want to go out on.

“You don’t want to go out on a performance you’re not happy with, individually and collectively. It is what it is. Whenever the dust settles, I’ll look back with a lot of pride in everything that I’ve achieved – but the last game won’t go on the highlights reel. That’s the way it is.”

1 America at Large: On Long Island, longing for a return to our field of dreams
2 ‘For 25 minutes I ran out of oxygen’: Pepe Reina on his coronavirus battle
3 Australian rugby staring into abyss as another crisis hits
4 ‘This is sick’ - seventh-tier Swedish club cancels friendly after betting mayhem
5 Garry Ringrose to stay with Leinster as he signs two-year central contract
Real news has value SUBSCRIBE