Ireland left with egg on their faces in Cardiff 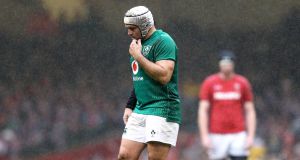 Rory Best: ”We always strive to get better. We haven’t done that.”

Long before the finish of this 25-7 defeat the Welsh fans were laughing in unison. Laughing at Joe Schmidt’s decision to let the heavens into the Principality stadium. Laughing at the many Irish errors.

In between bellowing out ‘Land Of My Fathers’ you could almost hear the valleys roar: “If you can’t play in the rain don’t leave the roof open!”

The jeers quickly turned to joy, but Schmidt’s last Six Nations match in charge of Ireland will go down as his worst. It’s an unfitting end but Warren Gatland is also moving on, still smiling, still holding the Indian sign over his old schoolboy teammate and his former employers.

“It filters down, he’s the man at the top,” said herculean Wales captain Alun Wyn Jones of Gatland after this resounding 25-7 victory. “Don’t get me wrong, we’ve been under pressure and he’s been under pressure but he’s always been unflappable. He has a bit left on his contract but we’ll miss him when he’s gone.”

As it kept pouring down, Wales refused to flinch. Offer them points and they will gratefully receive. Same as it ever was in Cardiff.

“I think Ireland made a mistake leaving the roof open,” said Gatland with a smile as broad as the river Taff.

Miserable and damp to their bones, Ireland seem an awfully long way from March 2018 at Twickenham or last November when beating the All Blacks.

It’s about how you cope with being the best, New Zealand coach Steve Hansen warned them.

“We like to think there is more in us,” added Wyn Jones. “But we just put a big target on our backs as well.”

The Welsh captain gets it.

Ireland, when the questions came, gave the wrong answers. When England came to Dublin last month, they faltered in the physical stakes. When they sought to deny this Welsh Grand Slam in Cardiff, they produced their worse performance in recent memory.

In the first half Ireland created three scoring opportunities for themselves while gifting Wales five. The new Six Nations champions took four of them, a try and three penalties (Gareth Davies flopped on Bundee Aki to deny his team an extra three points).

Schmidt’s team made sloppy mistakes, in the slippy conditions they wanted, to remain at nil.

It took 83 minutes before Jordan Larmour breached the red line.

The lineout, called for the first time by James Ryan, malfunctioned as Rory Best failed to find numerous jumpers. For whatever reason, the timing was off with throws going too low or too high. The maul was fractured by Justin Tipuric on the rare occasion it crept towards the try line.

Best complained to referee Angus Gardner but to no avail.

The worst unforced error came from CJ Stander. With Ireland’s scrum hunched in prime real estate, middle of pitch 15 metres from the Welsh try line, Gardner signalled for a free kick. Conor Murray tossed the ball to Stander. The South African is no Gaelic footballer. His solo hit an Irish leg. Accidental offside. Wales put-in. With 27 minutes played the score was 10-0, and the title already looked secure.

Wales and Wyn Jones kept heaping the pressure on. Best, in his final Six Nations game, missed Peter O’Mahony in the lineout and Stander on his next throw, a simple option to number two yet these experienced, proven winners couldn’t execute basic tasks.

When they finally sorted out the set piece, in their own 22, the maul walked over the white line so Conor Murray’s kick straight to touch gave Wales an attacking platform they hardly deserved.

It was brainless rugby by a team that prides itself on street smarts.

The Cian Healy scrum penalty on the stroke of half-time seemed harsh but Gareth Anscombe refused to blink.

The 16-0 interval lead came from the strangest places: Ireland’s start was shockingly inept as Gareth Anscombe’s gentle outside of the boot nudge was gathered by Hadleigh Parks for a try after just 61 seconds (Later, Parks brilliantly ran down Jacob Stockdale). Next, Sexton coughed up a needless three points for going off his feet in a ruck.

Furlong gifted Anscombe another cool strike for stepping across the offside line in front of Gardner.

There was no way back when Johnny Sexton started kicking in a wild, undisciplined fashion not witnessed since his younger days. When Sexton flung the ball out of play on 56 minutes the humiliation was complete.

“We didn’t look too tired did we?” Gatland beamed, a reference to England coach Eddie Jones suggesting they were flagging.

“What was that one for?” Best asked Gardner as Anscombe lined up 22-0 on 53 minutes.

Several players previously nailed on to make the World Cup squad will be feeling the heat tonight.

Tadhg Beirne and Healy were hauled off. Beirne made one sensational steal on the Irish try line but he was otherwise anonymous. He was not alone.

Everyone saw the glaring Irish problems. The wet ball did not help.

It’s the deeper “malaise” Schmidt saw in Rome, and now Cardiff, that has them slipping to third in the world rankings.