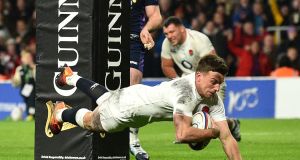 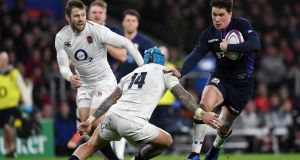 George Ford rescued England with an 83rd-minute try to secure a 38-all draw with Scotland on Saturday after the Scots had come from 31-0 down to lead 38-31 in one of the most remarkable games in Six Nations history.

England began the match knowing the title was out of their hands after Wales completed the Grand Slam by beating Ireland earlier but still ripped into Scotland from the start.

Jack Nowell grabbed the first try after 56 seconds and further scores by Tom Curry, Joe Launchbury and Jonny May - his sixth of the championship, had them 31-7 up at the break after Stuart McInally scored a charge-down try in a rare bright moment for the visitors.

It clearly gave them a lift as they were unrecognisable in the second half, scoring four tries in 13 minutes - two for wing Darcy Graham and one each for Magnus Bradbury and Finn Russell meant that after an hour they had come back from 31-0 down to level the game at 31-31.

They then looked to have snatched their first Twickenham win since 1983 when centre Sam Johnson blasted through four defenders to score in the 76th minute, only for replacement outhalf Ford to find a way through under the posts at the death.