TV View: Sunday Bloody Sunday . . . Not Bono’s fault but Boy, that was Bad 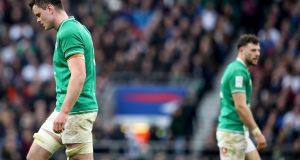 Before the game, Jordan Larmour was telling Virgin Media’s Sinéad Kissane about Bono’s motivational chat with the lads during the week, the gist of his message to them to go out and “chase greatness”.

Come half-time in Twickenham, though, it was a 17-point deficit they were chasing, leaving a sizeable chunk of the nation holding poor old Bono personally responsible for the setback. And possibly every sub-editor in the land tempted to go with Sunday Bloody Sunday as their headline for the mullering that was in it.

And you sensed it was going to be a Bono-themed day when ITV’s Nick Mullins squeezed in or around 87 U2 song titles to his intro – would it be a ‘Beautiful Day’ for Ireland, and such like. In the end, it was just Bad. Really Bad. We’re talking desperation, dislocation, isolation and desolation here. Followed by the condemnation.

Joe Molloy: “For you, what’s the most worrying aspect of that Irish performance?”

ROG was, then, mightily close to being lost for words, unlike Lynne Cantwell earlier in the day when Daire O’Brien asked her at half-time, when our women were trailing England 22-0, what was going wrong.

“England: dominant in scrum, lineout, linebreaks, recycling in general. Also not helping: Ireland hesitant in attack, going in ones and twos, back to things we’ve seen before, ineffective in their defensive reads, tackles, etc.”

That’s what you call succinct, to the point where there was very little left for Eddie O’Sullivan to say, other than ‘ditto’.

It’s not that the panel for the boys’ match expected anything other than an England victory – ROG, Shane Horgan and Matt Williams all reluctantly tipping Eddie Jones’s shower, but it was the gulf between the teams in that first half that left them ashen-faced at the break, Alan Quinlan having spotted the chief difference: namely in the ball-handling department: “Contrast us with the way England are passing the ball with their lovely little soft hands,” he said.

Over on ITV, Clive ‘Sir’ Woodward was swooning over said lovely little soft hands, his only complaint that “England should be even further in front – that’s one of the most one-sided halves of rugby I’ve seen.” Brian O’Driscoll chewed his inner left cheek. What could Andy Farrell say to his team, asked Mark Pougatch. “That they can’t be any worse in the second half,” said Clive, in a the-only-way-is-up kind of way.

Back on Virgin Media, the only word Shane could find was “dire”, while ROG feared the worst was yet to come. “Ireland are on the ropes – but on the ropes mightn’t be too bad a position considering what might be ahead.”

“It could get embarrassing,” Shane agreed. (Could?)

As it turned out, Ireland won the second half 12-7, although Gordon D’Arcy, located in the ITV commentary box, wasn’t prepared to order an open-top-bus parade for Farrell’s men, putting the comeback down to England taking “their eye off the gas”.

And the Virgin Media gang weren’t Ole Oleing either, Matt declaring that “we have a problem with England now”. Shane seemed puzzled by the “now”, maybe even contemplating buying his colleague a copy of FSL Lyons’s ‘Ireland since the famine’, just adding “we definitely have an issue with England”. With no now.

Lest we be too downcast, though, Matt tried to raise our spirits. “If Ireland can get a winning bonus point against Italy – which they should – and then pile on as many points as they can – without being disrespectful to the Italians – and go to France and get a win, then they’re in with a shout.”

But such was the prevailing mood, that felt a little like: if you get the first number in the lottery draw, then the second, third, fourth, fifth and sixth, you’ll be rich.

Back on ITV, Mark was telling us that “it’s son of the father who’s top dog in the Farrell household tonight!”

“Mrs Farrell’s got her England shirt on tonight,” Clive chuckled. BOD chewed his inner left cheek. Marriages have been annulled for less.

But lay off Bono, it’s not his fault. Although perhaps they should bring in his lead guitarist next time, just to, you know, give them, the, um, Edge.