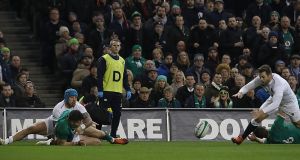 England’s Elliot Daly scores a try after a mistake by Ireland’s Jacob Stockdale during the Six Nations clash at the Aviva Stadium. Photograph: Lorraine O’Sullivan/PA

The words pierced through Irish hearts. The song that carries England wherever they roam, booming down from the Aviva’s upper tier, into a happy and glorious Dublin night they went, the Six Nations and World Cup narrative utterly changed.

Deserving, dominant victors proved that size still matters above all else in rugby. Fee fi fo fum. Imagine how it felt to be English on March 17th 2018.

They remembered the ransacking of Twickenham. Picture Eddie Jones smiling on the Algarve this past fortnight as Billy Vunipola and Manu Tuilagi danced from collision to collision.

No longer imagine the power game a healthy England are capable of unleashing in Japan.

“These games got nothing to do with the World Cup,” Jones countered. “We are just starting on our attack, just starting to coach it now, we’ll build it up.”

When Schmidt describes this experience as a “reality check” and puts the “bullying” on a par with the All Blacks’ violent win in November 2016, his deep fears are suddenly apparent.

“That’s how it is going to be at the World Cup,” the Ireland coach confirmed.

What’s clear is the game’s basic premise will never change. It’s a heavyweight sport. That’s why Ireland’s climb to number two in the world has been so astonishing.

A vital ingredient was missing. Schmidt sensed it in the warm-up. He feared the silent moments. The general vibe.

“You are talking about human beings here,” he stressed.

Ireland, for all Schmidt’s clever schemes, found themselves in real and potentially unsolvable strife once England were permitted to slow ball, for an off colour version of Conor Murray, and block Irish kick chasers.

That forced the game to be played on England’s terms. Sweet Chariot, those invading words, kept threatening to pierce the din.

Elliot Daly’s try on the half hour almost allowed English voices to overpower the wolf whistlers. Study it back and Daly’s finish had nothing to do with luck.

The rejuvenated fullback spied space in behind, betting heavily on Jacob Stockdale’s otherworldly confidence trying to control the ball one-handed in his own dead ball area. Jack Nowell caught the big Ulster winger flush as he finger-tipped possession onto the grass in a complete role reversal of last season’s heroics.

Daly pounced, Owen Farrell nailed a second touch line conversion and – just like that – the hunters sniffed an unlikely victory only they believed possible.

“I don’t think I’ve seen a game where we have played opponents that have so many physically dominant tackles,” Schmidt conceded. “We got beaten up.”

Ireland were blessed to escape the first half only 17-10 behind.

Calming leadership – the hallmark of Schmidt’s Ireland – in the midst of this “suffocating” Test match was worryingly absent. Peter O’Mahony could barely unearth a scrap, he tussled briefly with Sinckler, and Sexton was remorselessly targeted, eventually damaged by Courtney Lawes, while Rory Best brought recent dodgy Ulster throwing onto the international stage.

If the first half was sobering, Act II provided an earlier than expected hangover for an Irish crowd vainly in search of reasons to roar. CJ Stander and Dev Toner followed Keith Earls into the infirmary but Schmidt refused to ignite a war of words despite believing Earls was stolen from the fray by Itoje’s high flying knee.

Robbie Henshaw suffered the most with novice wingers, Jordan Larmour and Stockdale, on either side.

Ringrose sparked a mini-revival with a smashing tackle on Farrell but England redoubled their efforts –Mako Vunipola making a stunning 27 tackles – to erase any notion of a revival.

Just after the hour mark Farrell blinked in front of goal. A routine penalty to make it a seven point affair miscued. The contest still aflame, Henry Slade snuffed it out. Jonny May, who expertly answered the aerial inquisition, was sent clear down the left by the Exeter centre’s slick pass off an English scrum before a delicate chip allowed Slade glide past the cover.

Beaten all ends up, Farrell rediscovered his mojo to make it 25-13 with a mammoth strike as 10 minutes showed on a clock that no longer mattered. You could hear the words. Singing their song, taking back what they feel is rightfully theirs – superiority over all comers in the Six Nations.

The pendulum never stops swinging. Ireland had to answer for Twickenham. It flows back across the Irish Sea but this result comes with a foreboding feel.

That’s how it is going to be from now until Tokyo nights. Springboks and All Blacks scribble the blueprint to overcome Schmidt’s Ireland.

“There is a danger they will get better,” Schmidt conceded some more. “They’ve got the firepower.”