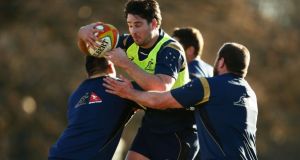 Ulster have confirmed that Australia international Sam Carter will be joining the province from ACT Brumbies this summer.

The 29-year-old made his Test debut against France in June 2014 and has earned 16 caps in total.

The son of former Wallaby David Carter, Sam attended The Scots College in Sydney, before going on to represent Sydney University.

He made his debut for the Brumbies in 2011, against the Melbourne Rebels, and in 2018 he became just the twelfth player to make 100 appearances for the club. To date, he has earned 105 Super Rugby caps.

In February 2017, Carter was named as Brumbies co-captain alongside Christian Leali’ifano, who himself enjoyed a successful four-month stint at Ulster last season, and they have jointly led the side over the past two Super Rugby campaigns.

Carter says he is looking forward to his move to Belfast: “I look forward to joining Ulster later in the year and I’m excited by the prospect of playing with the team at Kingspan Stadium. The opportunity to compete within the northern hemisphere tournaments represents a new challenge for me and is something I feel ready for.”

Commenting on the deal, Ulster head coach Dan McFarland, added: “We’re really happy that Sam has chosen to come to Ulster and we look forward to welcoming him to the club and the province. In addition to his undoubted quality on the field, Sam is renowned for his leadership, having shared the captaincy of the Brumbies over the past couple of seasons.

“Sam has an excellent work ethic and a strong set piece game, where he has led one of Super Rugby’s top lineouts over the past five years. He will add another level of experience and leadership to our forward pack and will significantly enhance competition for places within our squad.”