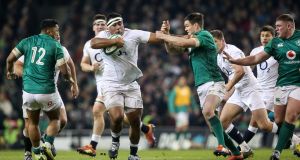 England’s Mako Vunipola tries to shake off an attempted tackle from Ireland’s Johnny Sexton during the Six Nations match at the Aviva stadium. Photograph: Gary Carr/Inpho England’s Maro Itoje gets to grips with Ireland’s Devin Toner during the Six Nations match at the Aviva stadium. Photograph: Tom Honan

In rugby, defence is a state of mind said Mako Vunipola after England ripped Ireland a new position on how this year will go. It’s about a lot of technical things to get right, the tackle, the angles and the body position. But mostly it’s about wanting to win the collision when it happens.

Joe Schmidt used the word bully. A frank admission from the coach who has taken the Irish team to its most rewarding streak in history through applying a set of basic principles into every player. Where Ireland came up short was one of those elementary blocks. The hard part is that it was all in plain sight and wholly expected.

Eddie Jones picked a team that would confront Ireland physically. Ireland knew that they would, with the Vunipola brothers Billy and Mako, with Manu Tuilagi, Jack Nowell and with Nathan Hughes on the bench. Therein lies the mystery. In that England were no different from other teams Ireland have beaten

“When you beat Ireland on their home patch it is a statement in itself,” said Mako. “We are good players in our own right. We are here for a reason. So he [defence coach John Mitchell] gives us the framework to work off and then it is about the guys. When you think about it, defence is just a mindset.

“You can have the best systems in the world and if you don’t want to get off the line and hit someone, then they will always break you down so we knew that. As a forward pack especially, we knew we had to front up. They have some good ball carriers in there.”

In Tadhg Furlong’s voice was a note of regret and failure. For a prop who trades in the currency of elemental confrontation, to be stricken by England’s ability to bully Ireland at the breakdown and force slow ball seemed almost an affront.

Against New Zealand and other brawny England teams, Schmidt had managed his players into a place where it no longer happened, where Ireland were considered a dominant force. The breakdown was their domain. It was an area of the game in which the team took pride. But Ireland were all sorts of beaten up.

“Yeah, that’s probably pretty fair and accurate I would say,” said Furlong. “I think it is within us, definitely, to turn it around. You just recalibrate, look and learn. We’ve been on a good run, and look, this is just probably a bit of a reality check for us. It’s important now that we look after the bodies, take on what we can learn from the game.”

Part of England’s message came 10 minutes into the match when Johnny Sexton was hit late by Billy Vunipola. Three minutes later Keith Earls was slammed across the chest by flanker Tom Curry, which earned him a spell in the bin. After 18 minutes Maro Itoje collided with Earls again, his knee to the Irish winger’s midriff and hip to the head. Again he went down.

England came with physical intent, exploited it and used it to play where they wanted, the sublime Elliot Daly, Jonny May and Henry Slade making Ireland pay. It was always their intention. England knew they had the bodies and when beefy Ben Te’o dropped out, a bigger unit in Tuilagi came in. Rugby has always been physical. Even more so now.

“Look I think I said a few weeks ago that was the plan but you never know what happens until someone punches you in the face,” said Billy Vunipola.

“You can plan all you want but if you are not right mentally and physically to stand up to that challenge . . . as a team I think it showed out there and we knew Ireland dominate possession. That’s because they are physical and they are very smart too. But first and foremost they are very physical.”

There was a group of Japanese journalists in Dublin watching how Ireland performed. They are already looking at the pool matches in the World Cup, where the hosts will face Schmidt and his side. It was difficult to know what they thought. Best just say that’s probably not the Ireland they will meet in Shizuoka Stadium next September.

4 Disappointing Nations Cup set for a finale of ‘farce’

Antoine Rozner pips Andy Sullivan in Dubai smash and grab 12:54
Wallabies fall short as they draw with Argentina in the rain 11:38
Emiliano Grillo storms into the lead in Mexico 08:36
Jim McGuinness: Cavan need illogical courage and variety to down the Dubs 07:00
Matt Williams: Scrum stoppages turning rugby into a boring spectacle 06:30
Crossword Get access to over 6,000 interactive crosswords