John Cooney gets to realise a dream on a nightmare evening 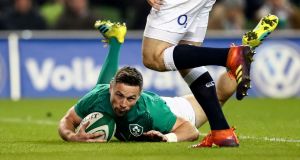 John Cooney scores a late consolation try for Ireland in the Six Nations game against England at the Aviva stadium. Photograph: James Crombie/Inpho

John Cooney watched the game for 77 minutes wondering if the moment would come; a fifth cap, a first appearance in the Six Nations Championship, a summons to chase a lost cause. Sandwiched into those three precious minutes were nine passes and his first try for Ireland, the reward for a typically intelligent support line.

The try felt a little hollow on a personal level when parsed against the result, a feeling to which he alluded after the match. It might act as a partial salve when the 28-year-old reflects on the frustration of not seeing more match minutes on Saturday evening.

Conor Murray was struggling with his game, appreciably below his imperious best, in a match Ireland didn’t look like rescuing and yet Cooney remained on the pitch, virtually to the end.

Losing to England doesn’t make Ireland a bad team, doesn’t negate the run of victories, the Grand Slam, the series win in Australia, the wins over the All Blacks, but in the context of this defeat it should have provided an opportunity to stress test the depth of the playing roster. Murray is entitled to play the odd substandard game but for Cooney to only get three minutes smacks of an opportunity lost.

He’s not a callow youth. He’s not inexperienced. His form is good. But with one start in five caps he remains unproven in the Test arena. There would have been no downside to him getting 20 minutes at the Aviva stadium.

Not that Cooney uttered a single word of complaint. Articulate and thoughtful he offered a brief insight into the try and a match with which he had a fleeting involvement.

“It was a consolation try. It’s more for my family and people who have been around for the last while when I was struggling with injury. It was nice for them but at the end of the day it didn’t really matter.”

What he did was realise a boyhood dream to play in a Six Nations match. “It meant a lot to my family, it’s something we would have grown up watching. I was pretty emotional getting on the bus and going to the game.

“Come the end, I didn’t know if I was going to get on. It was nice to get those few minutes but there was no pressure on me. It’s easy to come on in those sort of games; it’s completely different coming on in a tight game or when you’re starting.

“There’s a hugely different mentality when you’re losing. It’s quite easy to look good at scrumhalf when there’s nothing to play for. At the end we could have gotten a bonus point and I think the tempo was quite good but you’re just trying to fit into the team. I did okay in November, I would have liked to do better, but hopefully, I can keep going from here.

“I was smiling during the anthems. During the tough times with injuries this was always something I’d envisaged and something I always knew that I would get to. For me it was pretty emotional because, when you set a big goal and you’re injured and nowhere near it [but] I always believed I could get there.

“It was the ticking of a box. I had this mentality, I met a sports psychologist and she told me to train as if I was already an international. I always held myself to those standards in training and it has paid dividends in the end.”

What Cooney needs is more exposure to Test level if Ireland coach Joe Schmidt adheres to trying to broaden the depth and range within the squad then Cooney should be given more than a perfunctory footnote at Murrayfield next weekend.

When the call came that he was going on he “relaxed a bit more”.

“As an opportunity, I probably overemphasised it a bit. Things that I would think of as my strengths, I didn’t really get to show. I look forward to getting to use them in these games hopefully with a bit more time.”

The Scotland match carries a personal resonance for the Ulster scrumhalf. “My dad is from Glasgow. My granda, my uncles, they all still live in Glasgow so it’s a huge one for me personally.”

All he needs now is a decent chance.

1 Seán O’Brien: Anger over my parents’ break-up has never left me
2 Six Nations - Ireland v Italy: Kick-off time, TV details, team news, standings and more
3 Ireland out to make a bold statement of intent against callow Italian side
4 Here is your handy guide to sport on television this week
5 Ireland entitled to feel at home with sparing use of residency rule
Real news has value SUBSCRIBE

Heartbreak for Tuohy and O’Connor as Tigers down Cats 13:14
McIlroy well off pace as Thomas leads low-scoring Zozo 10:24
Seán O’Brien: Anger over my parents’ break-up has never left me 09:30
Touching response to Marcus Rashford’s clarion call reveals very best of England 07:00
Michael Walker: Is De Gea an answer again amid the questions at United? 06:00
Crossword Get access to over 6,000 interactive crosswords